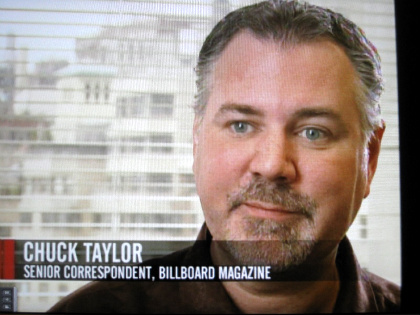 fan we know.  As a matter of fact, he’s the only Celine Dion fan we know.   Chuck’s real job is at Billboard Magazine which has landed him on TV a few times talking about his favorite diva.  He writes on his blog about being part of a new E! True Hollywood Story about Dion airing soon:

Chuck Taylor Blog: Celine DIon and I am thrilled that E! has finally produced a “True Hollywood Story” on my main muse, and I was fortunate to be included once again. I received a DVD copy of the upcoming episode, scheduled to debut Friday, Dec. 5 at 9 p.m., with an encore Saturday, Dec. 6 at 8 a.m. Boy, it’s nice to have several bits of commentary, but it was an unfortunate time for me to be captured on tape. I am about to burst out of my own face, egads. Here’s a fun game: Every time, Chuck is shown, drink as many shots as I have chins.