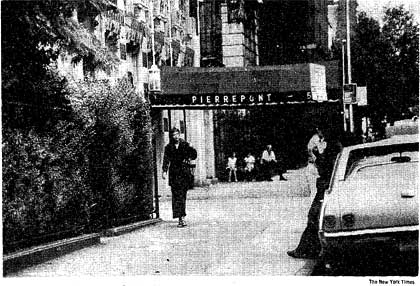 With all this talk about the return of 1970s economics,  it’s time to see what that would really mean for  Brooklyn Heights.  Over the next few weeks, we’ll post items from newspaper archives that will give us all a taste of what a Life on Mars-like return to the Disco Decade would mean for us all.

On Septemer 24, 1973 the New York Times ran a story, “The Pierrepont: A Brooklyn Horror House; A Serious Annoyance“,  about the sub-par conditions at 55 Pierrepont Street.  While the conditions there today are far from those described in the article, they seem to be typical of the era.

One neighbor described the atmosphere created by some residents of the hotel:

“It’s unbelievable… The whores shout down from the windows to their pimps and the sidewalk and the pimps shout back.  Sometimes the girls hang out of the windows stark naked… Drunks and addicts stagger across the street, urinate on our walls, then sit nodding on our steps. Men come at all hours of the night shouting and looking for the prostitutes and there are fights and knifings right here in front of my house.”

To add to the commotion, the article reports on the activities of at a “so-called gay club, known as Man’s Country” located in Pierrepont’s basement and on its second and third floors:

It consists of a pool, sauna and dance floor in the basement and rooms and meeting areas on the upper two floors.  The club advertises regularly in underground sex newspapers, according to local residents.  On recent nights, a constant stream of men, singly and in couples, could be seen entering and leaving the club between 8 PM and 1AM.

The Pierrepont today is a very different place serving as home to the Brooklyn Heights Association, the Brooklyn Women’s Exchange, the St. Charles Jubilee Senior Center and others.

Look Sharp
There’s a Film Crew Outside Your Door.