There’s a Film Crew Outside Your Door. 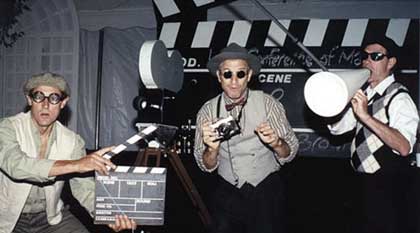 Well, maybe not at this very moment. But, given that this is one of the most-filmed neighborhoods on earth, it’s bound to happen sooner or later. Most of us, I think it’s safe to say, find the attractiveness of the Heights to movie-makers something of which we can be proud, and take occasional slight inconveniences caused by it with good grace. We also recognize the importance of the business to the local economy. Nevertheless, problems can arise.

The Brooklyn Heights Association has posted useful informartion about the permitting process for film shoots and the rules of conduct for film crews, as well as contact numbers for residents who wish to complain about unacceptable behavior, on its web site. According to the BHA:

Production companies frequently use Brooklyn Heights for film shoots. If the BHA receives advance notice from the film company itself or from the Mayor’s Film Office, our practice is to call the production company location manager and the Mayor’s Office of Film, Theatre and Broadcasting (MOFTB) to sensitize them to the negative impacts the shoot will have on our neighborhood. We also forward residents’ complaints to the company and the MOFTB.

Dean McCann, Director of Production at the Film Office (“MOFTB”), advises us that all applicants for film permits (TV shows, Commercials, Feature Films etc) are given a list of rules, which they are supposed to follow, when filming on location in city neighborhoods. McCann has stressed the point that his office encourages filming because it is one industry that is still expanding in these uncertain economic times, generating huge revenues and many jobs for the City.

The MOFTB issues a “Code of Behavior” to applicants that includes these guidelines:

1) Post notices of parking restrictions well enough in advance so that people can move their cars. This means at least 48 hours. For shoots that have towing permits, the notice has to go up before the “alternate side parking” day to be seen when motorists routinely go to move their cars. );

2) Be courteous to residents and businesses on location and stay within the limits of the permit, both in terms of space and times;

3) Clean-up all waste created by the shoot.

WHAT WE CAN DO: Residents who are disturbed by neighborhood film shoots can and should demand better enforcement of the rules and conditions on the permits. The Film Office now has only 4 inspectors and the Police Department’s special unit for film shoots is too small to be at all shoots. But when there is a violation, complainants should immediately call the MOFTB at 212-489-6710 (even on a weekend-leave a message because McCann says they check it) and the NYPD unit at 718-281-1235. Residents may also call the 84th Precinct for regular police matters connected with the shoot, like excessive noise after 10:00 PM or dangerous situations like the blocking of a street with no officer on duty. Do not wait until it’s over to complain because the Film Office or NYPD have to catch the crew in the act.