You can almost taste it. Dellarocco’s of Brooklyn, the new local brick-oven eatery at 214 Hicks Street, appears days away from opening its doors to the delectable fragrance of fresh pies and a thirst-quenching wine & beer cafe. Over the weekend, signage was etched onto the windows in elegant gold lettering.

The restaurant is owned & operated by Brooklyn-bred brothers Greg and Glenn Markman and Joseph Secondino (who has known the bros for 30+ years). The three are also partners of the Heights Cafe next door at 84 Montague Street. As previously reported, Dellarocco has a separate kitchen—with a wood-burning brick pizza oven flown in from Italy—and will operate as an independent biz.

Delivery and take-out will be available, along with in-room dining boasting 15-foot ceilings with a menu specializing in personal pizzas, according to Greg Markman. It will be open seven days a week, likely from noon to midnight.

The restaurant takes the place of Overtures stationery and gift boutique at 216 Hicks, which closed after 30 years in December 2011; and Dara Ettinger jewelry at 214 Hicks, which opened in May 2011 and lasted eight months. High-end clothier J. McLaughlin is to the left, at 218 Hicks. The spaces at 214 & 216 were combined into one large parcel in February. 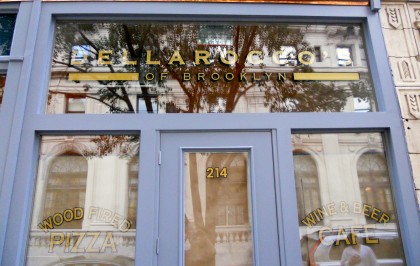 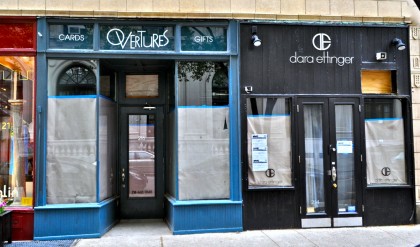