After 30 Years, Final Curtain Call For Overtures In January 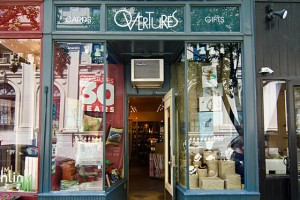 After 30 years at 216 Hicks Street, chic stationery and gift boutique Overtures will be closing in mid-January. According to manager and the designer of its lustrous window displays Jerry Morin, owner Michael Davidson decided to shutter the beloved boutique with an eye on retirement amid a testy economy.

Beginning on Boxing Day, December 26, Overtures will begin a “Goodbye Sale,” with markdowns on its fine selection of gifts, candles, home fragrances, bath and body, paper and party goods and jewelry. The store is open most days from 11 a.m. to 8 p.m.

New York magazine recently offered a tasty write-up about the destination, saying, “Since 1981, this chic stationery and gift shop exudes the same history-steeped elegance as its picturesque Brooklyn Heights neighborhood. Even typical souvenir items retain a degree of understated sophistication.”