Marty: AG “All Over” Continuum on LICH 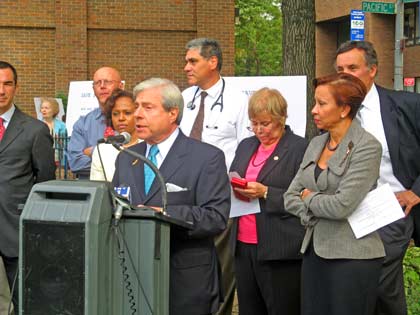 At this afternoon’s rally to protest Continuum Health Partners’ proposal to close obstetrics and pediatrics at Long Island College Hospital, Borough President Marty Markowitz (photo) castigated Continuum for its failure to open its books to himself and other public officials, or to work with those officials, community leaders, and LICH medical staff to try to solve the Hospital’s fiscal problems without denying the community essential services. He said he had spoken with State Attorney General Andrew Cuomo, who had assured him that the AG’s office is “all over” the issue.

Besides the Borough President, local political figures who spoke at the rally against Continuum’s proposal were Congresswoman Nydia Velazquez, Assemblywoman Joan Millman, Assemblyman Hakeem Jeffries, and Councilman Bill de Blasio. Councilman David Yassky could not attend, but a representative from his office read his statement opposing the closures. Other speakers included Dr. Toomas Sorra, a gastroenterologist who practices at LICH, who asked what options local residents would have if the planned closures happen.

You’re having a baby? Fine. Go to the new Beth Israel Birthing Center in Manhattan. Your child is having an asthma attack? Call a car service.

Rabbi Serge Lippe of Brooklyn Heights Synagogue said, “I’m not an elected official. All I have to say to Continuum is ‘Shame, shame, shame!'”

According to Mary-Powel Thomas, Director of Health and Human Services in the Borough President’s office, two legal issues that are being considered in connection with Continuum and LICH are: first, whether LICH’s merger into Continuum was lawful, as it was never submitted for review or approved by the State Department of Health; and, second, whether Continuum has used funds in LICH’s endowment in violation of the terms of the trust under which the funds were given to LICH.