The New York Times writes today about nightmare neighbors and unfortunate living conditions. Featured in the piece is a Brooklyn Heights story. 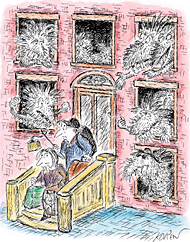 New York Times: The Last Straw: Gerard Splendore, an associate broker at Halstead Property, said his worst experience unfolded in the Brooklyn Heights co-op he bought in 1997 and shared with his wife and two children: their upstairs neighbors’ newborn baby began crying four to five hours a night.

“We were hysterical,” Mr. Splendore said. “We went upstairs and said, ‘Is there anything we can do to help you?’ ”

The neighbors reacted defensively. “They started to avoid us,” he said. “They were obviously not having any sleep either, and they were irrational.”

The baby finally calmed down, and that family moved on. In came a single European woman. “She just had no concept of how much sound could travel,” Mr. Splendore said. “She used to play rock music really loud.”

At other times, there were other noises, equally disturbing. “It sounded like she was dragging trunks,” he recalled. “And she wore big platform shoes that she would take off when she got home and throw them across the room one at a time. We literally waited for the other shoe to drop.”

A board emissary was dispatched, to little effect.

Two months later, Mr. Splendore was startled awake in the wee hours by a “gigantic crash” overhead. He swore, leapt from bed and tore upstairs.

“It sounds like the end of the world is going on here!” he said he told his neighbor when he confronted her at the door.

The neighbor apologized for dropping her television from what Mr. Splendore believes was a ladder. But he and his family had finally had enough. They sold the apartment and bought a house in Bay Ridge.