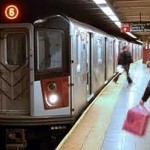 This is the penultimate weekend for the no-2-or-3-trains-to-or-from-Brooklyn debacle. What this means: no service at Clark Street or on the 2/3 platform at Borough Hall. Options: for lower Manhattan, the 4, 5 (which, unlike most weekends, will be running to and from Brooklyn), A (but not the C, which won’t be running to or from Brooklyn), F for the Lower East Side, or R. For Midtown West, the A, F, or R. For the Upper West Side, the A, or change for the 2 or 3 at 59th Street.

For those traveling into Brooklyn, there are more complications. Manhattan bound 4 and 5 trains won’t be stopping at Eastern Parkway, Grand Army Plaza, or Bergen Street, so to get back from the Brooklyn Museum, Botanic Garden, Brooklyn Public Library Main Branch, or Park Slope, you’ll need to take an outbound 4 or 5 to Franklin Avenue and catch a Manhattan bound train there. The F won’t be running between Jay Street-Metro North and 18th Avenue, but will be replacing the C between Jay and Euclid Avenue. To get between Jay and 4th Avenue-9th Street, you’re advised to take the R. The G won’t be running from Hoyt-Schermerhorn to Church Avenue, but will be replaced by free shuttle buses.