BHB contributor Weegee points out to us that today is the 16th anniversary of St. George Hotel fire. The 18 alarm blaze devastated the building, which in its early days was touted as being “absolutely fire-proof“. FDNY chief Steven DeRosa wrote about the blaze on FDNewYork.com:

The same week as the St. George fire, brush fires were spreading across Eastern Long Island and many FDNY units rushed out to help. Chief DeRosa picks it up from there: 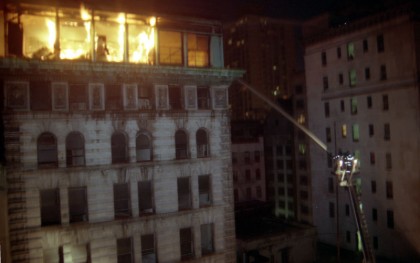 FDNewYork.com: On August 24, the FDNY sent 10 engines, 2 battalion chiefs, and staff officers for mutual aide. On August 26, 5 additional units were dispatched for relief. At 7:30 P.M. that night, Suffolk County Fire Command notified the FDNY that our services were no longer required, and that all units were en route back to the city. This turned out to be a fortunate turn of events. City fire fighters didn’t know it yet, but they were about to have one of the longest nights in recent history.

The St. George Hotel is a complex maze of 9 individual buildings constructed between 1885 and 1933. In all they occupy an entire city block that measures 200 x 400. With it’s spectacular view of lower Manhattan and salt water swimming pool, it was THE place to stay in Brooklyn.

Changing times and economy took a toll on the complex. Eight of the buildings were converted for residential use. Of those 8 buildings, 2 had been vacated and remained vacant for years. The Clarke Building, 10 stories 75 x 90, and the Marquee Building, 12 stories 50 x 85, became home to vagrants. Though the entrances to the buildings were boarded up, the resourcefulness of the homeless prevailed. All 9 buildings were interconnected via the basement and they made their way from the basement of the St. George; parts of which were being used to house homeless people.

At 0331 hours of August 27, the Brooklyn central office received a call reporting smoke in the area around the St. George Hotel. The first arriving units checked in with hotel personnel but they had no indications of a fire there. A fire fighter on the roof of the hotel spotted fire in the rear of a building down the block and the 10-75 was transmitted.

Ladders 118 and 110 forced entry to 51 Clark St (The Clarke Building) and fire fighters carrying 2.5 inch roll-ups ascended the stairs. They were met by heavy fire on the 9th floor and hooked up to the standpipe on the 8th. That proved to be in vain as the standpipe system was vandalized and useless.

Fire was spreading rapidly through holes in the floors and open elevator shaft to the floors above, and laterally through open doors to exposure 4 (The Marquee Building). With conditions deteriorating quickly, a withdrawal was ordered and an exterior attack began.

“Deteriorating quickly” is an understatement. Within 47 minutes of the 1st alarm, the 5th alarm was transmitted as fire completely filled The Clarke Building and the upper floors of The Marquee Building. As the interior of The Clarke Building collapsed, huge flaming embers driven by the high heat rose above the 31 story Tower Building (111 Hicks St.)

The Tower Building is a fire-resistive type construction measuring 172 x 150, irregularly shaped. The rear of the building was directly exposed to the fire and heat emanating from the Clarke Building. Seven apartments were on fire simultaneously.

Atop 60 Pineapple St. (The Pineapple Building) was a water tank used to increase water pressure to upper floors of high rise buildings. A combination of flying embers and high heat caused this structure to ignite spontaneously. Fearing that the tank would collapse, Rescue 3 and the Collapse Unit were assigned.

Since the Clarke, Tower, and Pineapple Buildings front on 3 different streets, 3 separate sub-commands were setup. If you count only the engines, ladders, and battalion chiefs, there were 110 pieces of apparatus at the fire scene. The streets of Brooklyn Heights are very narrow and many units had to park their apparatus blocks away from the fire building. Giving instructions to the incoming units was the responsibility of the radio dispatcher.

I can’t relate in writing what the air traffic was like for the first hours of the operation. Most of the responding units required instructions on where to respond; sub-incident commanders screaming for additional units; staff chiefs and department brass requesting information. It seemed that all ears were on Brooklyn. This created an exceptionally stressful situation for the radio dispatcher.

This intense situation was handled adroitly by Jeanne Williams. With most of the personnel in the central office busy preforming their respective tasks, she was operating unassisted.

Jeanne is a 21 year veteran of the civil service system, and spent the last 12 years in the NYPD’s communications section before coming to the FDNY in 1993. Her experience on the Citywide-S.O.D. radio greatly aided her in handling this event.

The tour supervisor that night was Eugene Naylor, a 26 year veteran of the FDNY who spent most of his years in Brooklyn. He was busy with the Decision Dispatcher assigning units and contacting the other boroughs to arrange for additional companies. Staten Island was the only borough that did not supply Brooklyn with additional apparatus.

The remainder of the dispatch force in Brooklyn that night was Michael Esposito, Connie Brown, Thelma Irving, Vincent Como, and Carlos Sanchez. All received a commendation from the Fire Alarm Dispatchers Benevolent Association for extraordinary professionalism, and are being considered for the O’Brian award (an administrative award given by the Department for excellence in the communications bureau.)