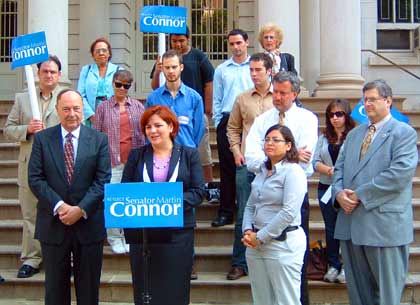 NYS Senator Martin “Marty” Connor who is in a heated primary battle with upstart Daniel “Kid” Squadron to keep his 25th District seat, earned the endorsement of 6 New York City Council members this morning.  Speaker of the New York City Council Christine Quinn and Councilpersons Bill diBlasio, Inez Dickenson, Lou Fidler and Rosie Mendez announced this morning on the steps of  City Hall their intention to back the incumbent who has served Brooklyn Heights for three decades.  Council members Robert Jackson, John Liu and Alan Gerson are also backing  Connor but were not at the ceremony.

A press release from the Connor campaign included this statement from Speaker Quinn:

“New York City has no greater friend in the State Senate than Marty Connor. He has fought tirelessly to ensure we receive our fair share of State Aid for New York City’s schools. His hard work has secured billions of dollars in school aid and construction money we would not have received without his strong stands in Albany. Also year after year, in years when it was a lot harder than it is today to stand with the LGBT community Marty Connor always stood with us. It is never easy to be … on the right side of civil rights, but when you’re leading and on the right side of civil rights its often harder because there are fewer folks to stand in with you. His constituent services have made New York a better place to live, work and raise a family. We need Marty to return to the statehouse to continue to fight for New Yorkers. I am proud to endorse him for re-election.”

Connor will be a guest on The Homer Fink Show LIVE tomorrow at 4pm.

CHA – More Fun than the BHA?
Spooked in the Heights