A total ban on tourist helicopter flights over New York City is the only way to resolve the noise and safety issues these flights cause, according to elected officials and local residents who gathered at Pier 6 on a gloomy, drizzly (and therefore blessedly chopper-free) afternoon. Previous attempts to restrict flight paths so as to lessen the noise impact on Brooklyn Heights, Cobble Hill, and Red Hook have failed because, as speakers noted, the East River is too narrow to provide sufficient distance between the choppers and Brooklyn to mitigate the noise. Video added. Watch after the jump. 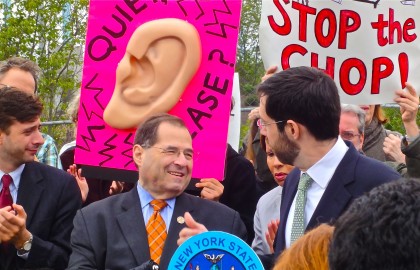 Rep. Nadler said that elimination of tourist flights would not negatively affect the City’s tourist industry because “no one comes to New York to take a helicopter ride.” He said the money spent on such rides would be better spent on shows, restaurants, and shopping. Sen. Squadron said relatives visiting Brooklyn had been appalled by the noise, which ruined visits to Brooklyn Bridge Park. Rep. Nydia Velazquez noted that views of the City skyline as good as could be seen from a chopper were available from Brooklyn Bridge Park and the Brooklyn Heights Promenade. Perhaps the most poignant remarks came from a Vietnam veteran and Red Hook resident, who said the constant helicopter noise was causing him to have flashbacks. Others who spoke included Assemblywoman Joan Millman, City Council Member Steve Levin, and Brooklyn Heights Association Executive Director Judy Stanton.