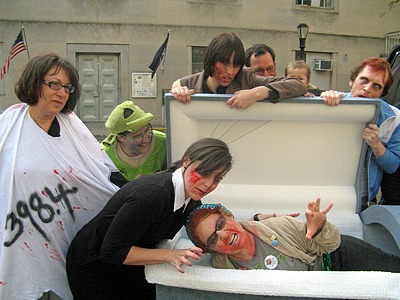 As my colleague Heather Quinlan previously announced, librarians (yes, those are librarians in the photo above) gathered at the north end of Cadman Plaza Park this morning to walk across the Brooklyn Bridge to City Hall to protest cuts to the City’s budget for its library systems. (More photos and text after the jump.) 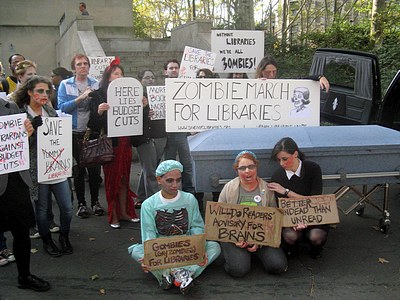 Here’s the zombie gang assembled behind the War Memorial at Cadman Plaza, ready to rise and shamble across the Bridge. 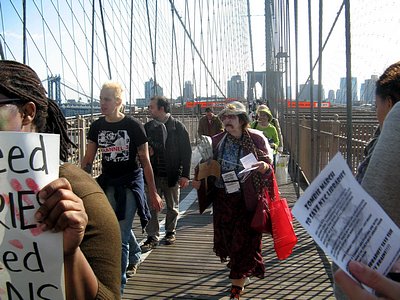 While the zombies crossed the Bridge, they distributed leaflets to passersby explaining the reason for their march. Yes, many were German tourists, but who knows? They may go home and put pressure on Angela Merkel to pressure Obama to pressure Bloomberg… 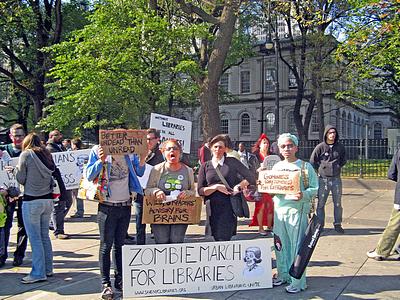 At the end of their long march, the zombies assembled on the plaza with City Hall in the background. No, the Mayor didn’t come out to greet them. Nevertheless, the march got lots of attention from the media (besides BHB), including Channel 12 news.
Share this Story:

Howl-o-Ween on the Promenade!
Halloween in Brooklyn Heights