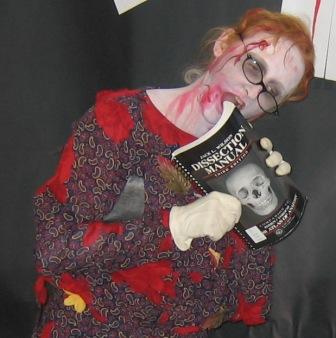 Zombie librarians love two things: brainy people and the Dewey Decimal System. So come join them as they try to save NYC libraries with a Halloween walk across the Brooklyn Bridge. (Bonus points for already wearing a zombie costume on Halloween, thus killing two undead birds with one stone.)

Info after the jump.

Urban Librarians Unite announce a Halloween Zombie Walk in support of New York City’s public libraries, to be held October 31, 2010, beginning at Cadman Plaza and continuing over the Brooklyn Bridge to commence at City Hall.

The Halloween Zombie Walk brings library-loving New Yorkers together for a day of public theater to draw public attention to the mid-year budget cuts faced by New York City’s public libraries. What does any of this have to do with zombies? Well, without libraries there are simply no brains, and zombies need to eat brains to live. With libraries across the city closed on weekends there is a desperate food shortage. So New York City’s zombie librarians will be walking across the Brooklyn Bridge to City Hall this Halloween to protest the drastic cuts to their food supply. These zombies are starving and without the support of the public library their future appears grim.

New York City’s three library systems serve 8 million residents from a combined 212 locations, numbering over 43 million visits in FY’09. Since the economic crisis began, library use has been at an all-time high, with many New Yorkers depending on their local library for access to the information, resources, and programs necessary to conduct job searches, complete their education, navigate the Internet, and access public services.

Mayor Bloomberg’s projected mid-year budget adjustment will cut funding for libraries by $16.5 million – 5.4% across the board. This comes on the heels of a devastating August reduction of $30 million that decimated weekend library service. Three years of brutal cuts during the biggest economic crisis in a generation have reduced public library funding by a shocking $74.5 million since 2008, or 20%. Additional cuts will result in further service reductions and layoffs, right before the holiday season. Unless Mayor Bloomberg and the City Council maintain funding, libraries’ ability to provide New Yorkers with job search help, afterschool tutoring, computer access and instruction, English classes, and research assistance will be sharply reduced by December 2010.

Dress in your bookish zombie best and march/shamble your way to City Hall to support your local library and feed your brain.

For more information on the Halloween Zombie Walk, visit www.savenyclibraries.org.