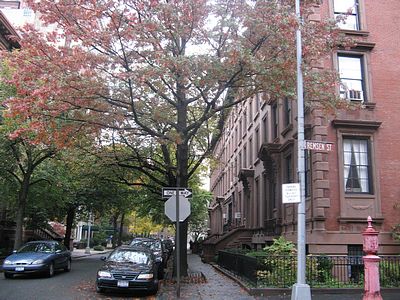 L Magazine has surveyed Brooklyn’s multitude of blocks, and named its fifty best in various categories. Two blocks completely, and one partially, in the Heights made the cut. The winner in the “Best Block for Historical Significance” class is Montague Terrace (see photo above).

It was here, way back in 1776 at the “Battle” of Brooklyn, that George Washington staged the evacuation of his army to Manhattan, allowing it to survive for another day, insuring that we’d one day drive on the right side of the road.

(Despite the snarky quotation marks, there really was a Battle of Brooklyn; indeed, it was the largest battle of the Revolutionary War. What happened in the Heights was its aftermath.) If there had been a category for literary significance, Montague Terrace could have won there, too, having been home to both W.H. Auden, who wrote New Year Letter at One Montague Terrace, and Thomas Wolfe, whose novel, Of Time and the River took shape two doors away at Number Five. Also, of course, Montague Terrace has featured as the gateway to hell, a distinction L bestows on Central Avenue between Moffat and Knollwood Cemetery, in Bushwick.

The winner in the category “Best Block for Groceries” is Atlantic Avenue between Clinton and Court, which straddles the Heights/Cobble Hill border.

All-world market Sahadi and wonderful bakery Damascus (nearly side by side) would already count for the win, but this block also has a Trader Joe’s, a Key Food, and the Green Pea Grocery.

I’m glad Green Pea gets a mention, but Key Food??!!

Finally, the nod for one of the “Five Best Brooklyn Blocks to Live On” goes to Columbia Heights between Clark and Pierrepont.

Hard to argue with the views from the western side of this heightiest of Brooklyn Heights streets. Seriously, how do these people get anything done?

It could also have been named best block anywhere for helicopter spotters.

I would have made Garden Place best block for Halloween decorations, as well as for trick-or-treating, but L awards both these to Humboldt Street between Nassau and Driggs Avenues, Greenpoint, which, I confess, I’ve never seen.

Neighboring nabes also made out well. Cobble Hill, as already noted, shares the “Best Block for Groceries”. Charming Verandah Place, between Clinton and Henry (which boasts another Thomas Wolfe residence, where he penned the classic exercise in local dialect, Only the Dead Know Brooklyn), gets another of the five best to live on awards.

Whenever we pass by the tiny Ted and Honey and see the happy people outside enjoying a drink or relaxing in the park or meandering down the lane-like Verandah Place, we wonder, “Who are they, and how did they get here?” And then we are jealous.

Smith Street between Bergen and Dean, on the border of Cobble and Boerum Hills, is named “Best Block For Street Festivals”.

This might piss off borough traditionalists of the Italian persuasion, but the annual Bastille Day party (brought to you largely by Bar Tabac, at the corner of Dean) is the most fun had by French people anywhere, ever.

Highbrow culture at St. Ann’s Warehouse or Galapagos Art Space; drinks before dinner or after at Water Street Restaurant; and fancy-ass dessert at Jacques Torres (closes at 9pm on weekends). Top off the night with a stroll through Brooklyn Bridge Park for that Woody Allen moment…

Front Street between Jay Street and the Manhattan Bridge is honored as “Best Block For Celebrity Sightings”.

Washington Street between Water and Plymouth Streets is called the “Best Block For Gallery Hopping”.

In the schadenfreude department, we note that Park Slope gets only two mentions, “Best Block For Iconic Brownstones” (Garfield Place between Seventh and Eighth Avenues) and “Best Block For Ugly Condos” (Fourth Avenue between 4th and 5th Streets: “It looks like a service road south of Cancun.”)

The most inexplicable entry is this:

45. Best Block for Urban Detrital Discoveries (by day), Lynchian Encounters with the Unheimlich (by evening), and Profound Malaise Bordering on Fear (by night)
Meserole between Bushwick Ave and Morgan Ave
This one wrote itself.

What kind of archaic hipster BS is that?