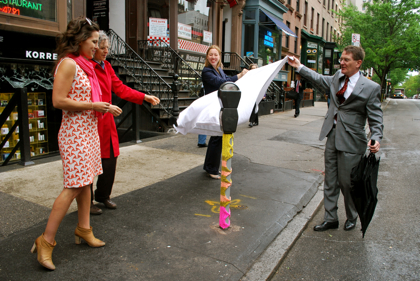 Montague Business Improvent District executive director Chelsea Mauldin (BHB Ten 2009) will be leaving the organization this fall, the Brooklyn Heights Press reports.   The paper cites an e-mail sent to the group’s board of directors on August 6 announcing her plans to leave in pursuit of “other opportunities”.   A successor to Mauldin could be named as early as the BID’s October meeting when it will elect a new president to replace Timothy D. King.

Mauldin championed several Montague Street boosting projects including decorating the thoroughfare’s parking meters with knitted cozies and “piazza  days” which will be returning this Fall.  (Maybe there’s still time for the BID to take up our suggestion for a “more better” piazza.)

Last year, we posted New York City’s plan to revitalize Montague Street in 1976. We took that conversation into the present day with Mauldin and some of the district’s merchants: