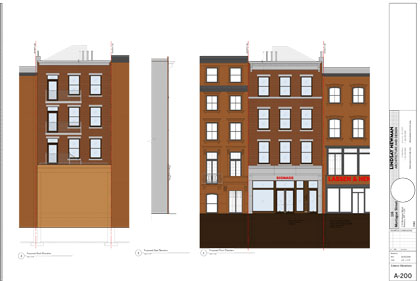 The Brooklyn Eagle reports that work has begun on the expansion of 116 Montague Street,  currently the location of a Sleepy’s outlet.   We first reported in February 2009  about the plans.  The  Landmarks Preservation Commission approved the design of 3 additional stories last year after telling planners to go back to the drawing board.  However, don’t expect the wild ‘n’ wooly pre-fabricated construction promised by builders last year:

Brooklyn Eagle: Although the Eagle had reported over a year ago that the added floors would be comprised of steel and concrete prefabricated modules, what will be constructed instead is a “more typical and boring” three-story addition, according to its architect, John S. Newman of Lindsay Newman Architecture in Manhattan.

The change from the more creative “and jazzier” modules to a traditionally-designed addition had to do with the need to bring a crane to Montague Street to install the modules coinciding with last year’s problems with cranes and crane operators citywide, according to Newman.

“What killed it was the insurance for the crane,” he said.