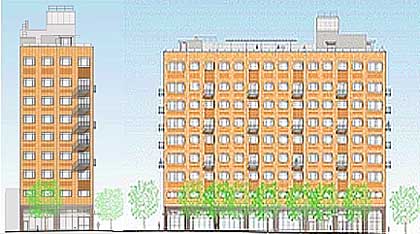 Rawlings Architects have released renderings of 75 Clinton Street, which is being converted from commercial to residential use:

Brooklyn Eagle: “We wanted to break down the façade to a more residential scale,” he said. “We believe this is a much more handsome building.”

The new façade will have a European terra cotta cladding in a variety of textures and colors (“more of a light brown to orange”) and balconies have been added on all three sides — with smaller juliet balconies along the narrower Clinton Street and five-foot deep balconies on the Montague and Remsen sides. “We also started the balconies at a higher level than usual because of the commercial nature of the streets below,” he said.

As for making it family-friendly, the 80 apartments will be a mix of studios, 1-, 2- and 3-bedroom units, according to Rawlings, who noted that among the three-bedroom choices there are two top-floor units at each corner that will also have private outdoor rooftop space.

The building falls outside the Brooklyn Heights Historic District, so it’s not subject to LPC approval.  What do you think of the design as represented here?