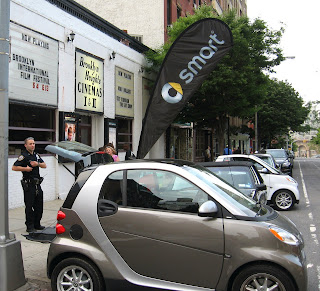 McBrooklyn reports on a Smart Car parking dust up Monday in front of the Brooklyn Heights Cinema.  The lil “critters” were parked in front of the theater as part of a promotion around the Brooklyn Film Festival happening there this week.  Mickey B picks it up from there:

The idea was to show how the critters were so little you could park them sideways. But the Smart Car people ran into a little friction from local cops who saw . . .  cars parked sideways.

But officers! They don’t stick out any further than your average SUV! Who cares what way they’re pointed?

A discussion was held and points were made. Finally the police said they’d look the other way this time, but their commanding officers would take a dim view of the sideways parking.

The cars remained where they were till 11:30 p.m. Then off they drove, over to Williamsburg for the rest of the weekend, for the Kent Ave. film festival screenings.