[Warning: Do not read this while eating, or if you generally have a weak stomach.]

Long time readers may recall the dog poop vigilante of 2011 who took matters into her own hands and taped signs around two lumps of dog feces left on Hicks St. reading, “Pick up your sh*t or don’t have a dog” and “What kind of lazy person leaves dog sh*t?” Why was she driven to such extreme measures? Her one-year-old almost picked up a log with his bare hands.

This morning, while walking through Cadman park at about 9:00 a.m., I came upon a fresh, still-wet pool of dog diarrhea that showed a half-hearted, shameless, and narcissistic attempt at clean up. If you’ve ever been to Cadman park on a nice day, you’ve seen the masses of kids rolling around on the turf. 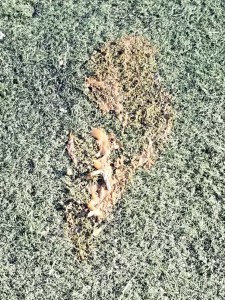 I mean, look at that. I couldn’t just leave that there for someone’s toddler to roll in it or grab at it. So, I marched to the field office behind the monument and spoke to a Parks worker. She was very nice and grateful for the heads up and said, “We’ll be clearing the litter soon anyway.” Not trusting how long that would take, I went back home, printed a sign, and covered up the biohazard. By that time, there were already four tiny tots toodling around on the turf. 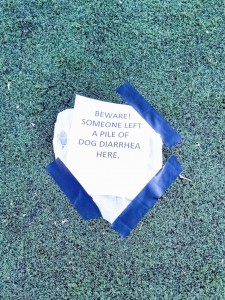 Asked for comment, the O.G. dog poop vigilante said, “It’s nice to see that someone has carried the torch to keep curious toddlers safe from disease in the Brooklyn Heights community.”

To the very selfish, very reckless offender: The EPA classifies dog poop as a toxic pollutant in the same category as chemical and oil spills. If your dog is sick and has diarrhea, I’m guessing it’s even more hazardous. Do you really need a lesson on zoonotic diseases given the recent news?

To all dog owners who use Cadman as a dog run before 9:00 a.m.: Please look out for each other. As one reader commented in the past, “If you see sh*t, say sh*t.”