By Julie Kanfer on June 7, 2010 10:01 pm in Arts and Entertainment, Brooklyn Heights, Profiles 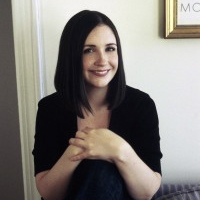 If J. Courtney Sullivan was particularly giddy on a recent evening at the Brooklyn Heights Wine Bar, it could have been because she just learned that her debut novel Commencement,

which was published last summer by Knopf and came out in paperback a few weeks ago, hit number 14 on the New York Times Best Sellers List.

Or, Sullivan’s mirth be the result of getting to live out her dream as a full-time fiction writer, having recently left her job at the New York Times, where she worked with Op-Ed Columnist Bob Herbert.

But maybe Sullivan, 28, is just plain old thrilled that she was back in Brooklyn Heights, the neighborhood she called home for two-and-a-half years before moving (for love) to Park Slope back in March.

“I completely fell in love with this neighborhood,” she cooed, dressed demurely in a retro navy blue dress straight out of the show Mad Men, a glass of sauvignon blanc in hand as she waxed poetic about the Heights.

Sullivan, who has been writing fiction since she was six years old, began Commencement while living in Manhattan, but wrote just 50 pages in a year-and-a-half there. “I was really struggling with it,” she admitted. “And I moved here, and it was like a dream: within maybe four months, I finished the book. It was really weird.”

Though living alone for the first time probably helped, Sullivan chalked much of her inspiration up to Brooklyn Heights itself. “The energy is so amazing, and also the literary history of this neighborhood is so incredible to me,” she said. “I think this apartment was magical for me in this way. I want to know who lives there now!”

Sullivan resided not far from where sat, at the leafy corner of Henry and Cranberry Streets, just above the Wine Bar. She is a Brooklynite by way of Massachusetts, having grown up outside Boston in a town called Milton, and later attending Smith College, which would become the foundation for her book. 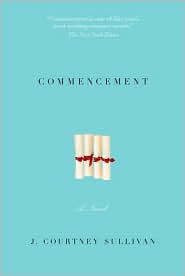 Commencement tackles the complicated nature of female friendships, centering on four girlfriends who meet during their freshman year at Smith and then go off in very different directions after graduation. Though no one character is based purely on Sullivan or any of her friends, she drew on her own experiences and feelings about post-college life while working on the book.

“You’re all seniors in college, you’re all the same age, life is pretty much what it is, and then all of a sudden people take off in these ways that are so different,” she said. “Some people are really dealing with relationship stuff, or school stuff, or family stuff. How do your friendships endure after you leave campus, especially a women’s college?”

At Smith, where Sullivan joked that she wore pajamas to class everyday, she majored in Victorian literature, and still reads and loves authors like Charles Dickens, and the poet (and former Brooklyn Heights resident) W.H. Auden. She’s currently reading novels by Maile Meloy, but commented, “There are certain things at certain moments that influence where you are in your life.”

For Sullivan, that place is living with her boyfriend and working hard on her second novel, about a dysfunctional Irish family, which has her full attention since she left the Times. As a reporter there, she wrote several stories about Brooklyn Heights, most notably about the sudden closing of four Henry Street establishments in 2008 after their proprietor was accused of identify theft, among other infractions.

“My beat was my block,” she said laughing, and praised the work this blog did on that story as well.

Her advice for aspiring writers is to “write until you cannot even see straight,” and to be prepared for harsh criticism. “If you want to bring down your self-esteem, you should always read comments on blogs,” she said. “Because you’ll absolutely just want to go out a window.”

One of the more challenging things about Commencement, or any novel written by a woman about other women, is just how to classify it: Is it chick lit? Feminist lit? Something else? Even Sullivan herself isn’t sure.

In the end, however, Sullivan knows all she can do is write what she can write. “Everybody else will decide what it is,” she added.

If the New York Times Best Seller list is any indication, then everybody else has decided one thing for certain: Commencement is a hit.