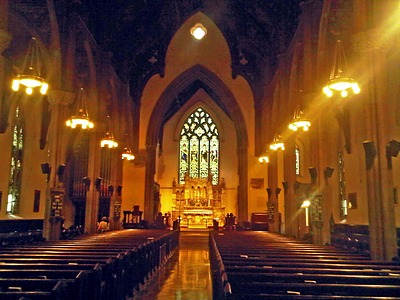 This coming Saturday, June 12, the Brooklyn Heights Association will present a walking tour of historic churches in Brooklyn Heights, guided by Alex Herrera of the New York Landmarks Conservancy. From the BHA:

Brooklyn Heights boasts an astonishing collection of architecturally stunning churches — in fact, it is a veritable outdoor gallery of 19th-century ecclesiastical design. Outstanding figures in American architectural history, including Minard Lafever, Richard Upjohn and James Renwick, all had a hand in designing churches of various denominations in the Heights.

Join us on a tour beginning at 10:30 a.m. on Saturday, June 12th that will celebrate the grandeur of 19th-century American church design, starting with the simplicity of the venerable Plymouth Church — whose first preacher, Henry Ward Beecher, influenced the course of our nation’s history — to the Gothic exuberance of Holy Trinity Church, and winding up at the serene, chapel-like Grace Church [see photo above]; along the way we will admire other notable masterpieces. These inspiring buildings serve as anchors to the community both spiritually and architecturally.

Alex Herrera is an architect, a preservationist, and an historian. He is the Director of Technical Services at the New York Landmarks Conservancy and has spent 30 years studying and helping to preserve and restore the historic landmarks of NYC.

Space is limited, so reserve your spot by emailing RSVP@austeragency.com. Admission price is $15. The tour will begin at the Plymouth Church of the Pilgrims on Orange St. between Hicks and Henry. The tour will take approximately 1 1/2 hours.

Come celebrate the 100th anniversary of The Brooklyn Heights Association with family and friends on one of New York’s most iconic cityscapes, the Promenade. Pack a picnic lunch or buy a bagged lunch at your favorite Brooklyn Heights deli or restaurant–or swap a sandwich with your neighbor. The festivities begin with a CRUMBS Bake Shop cupcake ceremony, followed by a FREE concert from Brooklyn’s own educational rock band, The Deedle Deedle Dees. Attendees can also relax in the Promenade sunshine while viewing a J. McLaughlin Mother/Daughter Fashion Show.