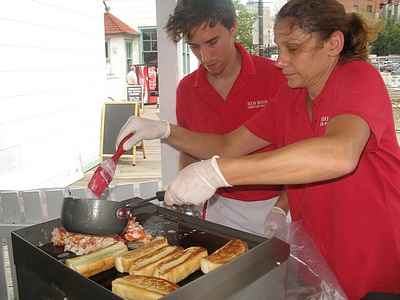 All of us have our notions of quintessance. I have a friend who, should you, for example, mention ginger ale, will tell you that the only one worth drinking is not available outside a fifty mile radius of Syracuse, where he grew up. For me, the quintessential pizza came from the Hub Tavern, downstairs from my grandmother’s apartment in Tyrone, Pennsylvania. Similarly, my quintessential lobster roll was in the “Maine style”: chunks of cold lobster meat covered in herbed mayo, served on a toasted New England split-at-the-top hot dog bun. When I read about Red Hook Lobster Pound’s “Connecticut style” roll, I was skeptical, but curious. Karl Junkersfeld’s hearty endorsement was enough to get me down to Fulton Ferry Landing yesterday to give it a try.

As I walked into the Pound’s tent, I was encouraged to see the proper J.J. Nissen rolls toasting on the grill. Several customers arrived at the same time, and we all asked for Connecticut, so owner Susan (see photo above) piled lots of meat on the grill, then drenched it with drawn butter as sous-chef Nick watched. The meat was then spread out to heat evenly and, when done to the proper temperature, loaded onto rolls. Each got a sprinkling of chopped shallots and seasoning, and was served with half a dill pickle and a small bag of Cape Cod potato chips. The result was quite satisfying, with the butter augmenting the flavor of the meat nicely. The next time, I might ask for a little heartier shake of the seasoning, as seems to have been given to Karl’s roll in his video. At $16.50, this isn’t a cheap lunch, but it’s a worthwhile indulgence.

So, am I a convert? No. I still like the Maine roll, but Connecticut makes for a pleasant change now and then.