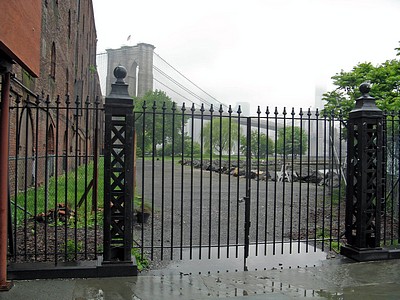 We earlier reported how obstinate state officials appeared to have delayed the opening of the Pier 1 portion of Brooklyn Bridge Park in a battle over who could claim credit for it. Now, it appears, the heavy hand of Albany may be delaying work on the Empire-Fulton Ferry section of the Park, between the foot of Main Street and the Brooklyn Bridge in DUMBO.

Empire Fulton Ferry Park closed down at the beginning of the year for a $3.5 million reconstruction project, but no work has been done since then.

A standoff between state and city officials is to blame for the delay, sources said.

According to the Daily News article, the heavy in this story appears to be State Comptroller Thomas DiNapoli, who has refused to allow the Brooklyn Bridge Park Development Corporation to proceed with construction work because of a technicality involving contract wording.