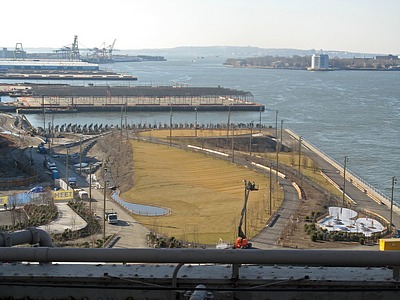 Greensward, paths, benches, stairs, and trees beckon visitors to Pier 1 in this photo taken from the Brooklyn Bridge on Wednesday, January 27. For some time, we’ve been advised that this portion of Brooklyn Bridge Park would open this month, but January has just two days left and no opening date has been announced. Thanks to a tip from reader Publius, we may now know why:

The New York Post: A turf war between the Bloomberg administration and the state over who will control two highly touted waterfront parks is causing even more holdups for both already-long-delayed projects, sources told The Post.

Most immediately, the squabble — the mayor wants to commit another $300 million right away but in return wants control of the two projects, while the cash-strapped state has been dragging its feet — is delaying the opening of the first completed segment of Brooklyn Bridge Park, which was supposed to open in Brooklyn Heights late last year. To date, no ribbon-cutting is set, and the green space remains fenced up.

We earlier reported on the City’s plan to commit an additional $55 million (the $300 million referenced in the Post article includes funding for parks on Governors Island) to park construction if the State would yield control of the Park. It appears that state officials, despite having no additional funds for the Park, may be opposing this because of their desire to take credit for the Park. 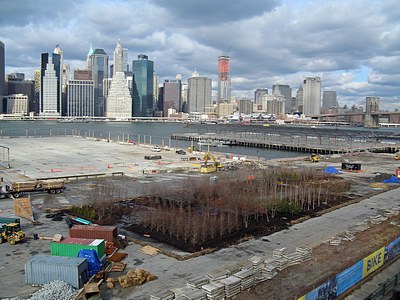 A reader e-mailed this question to us:

I’ve been wondering about the fate of the trees that have been sitting at the park site for a while. Do you have information about how long those trees will live just sitting there like they are, without being planted in the ground? I have no idea how long trees can live like that, but I wonder how much longer they can endure the park delays?

We have inquired of the Brooklyn Bridge Park Development Corporation concerning this, but have not yet received a response. These trees are evidently awaiting transplantation to Pier 6 which, as the photo below, taken on Tuesday, January 26 shows, has a way to go before it is ready to receive them (it is now slated for opening this coming spring). 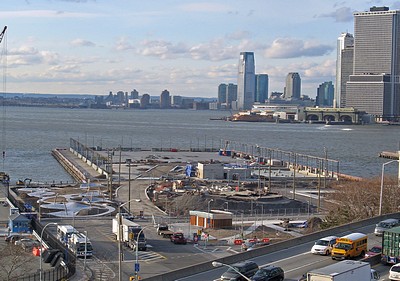 Finally, for some ground level views of the now ready to open Pier 1, and other Park news, see here.
Share this Story: