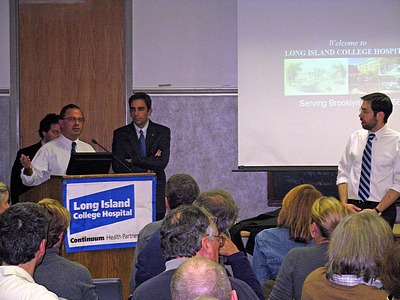 Characterizing Brooklyn Bridge Park as “the most exciting park project in New York City in 100 years”, City Parks Commissioner Adrian Benepe (at podium in photo) announced, at the meeting at LICH hosted by State Sen. Daniel Squadron (standing at right), that the City is prepared, pending State approval, immediately to commit an additional $55 million to the capital construction fund for Brooklyn Bridge Park. This money would be used to build athletic facilities, including a seasonal “bubble” on Pier 2, a skating rink, and a pedestrian bridge from Squibb Park to Brooklyn Bridge Park. The availability of these funds is contingent upon the state government’s approval of the City’s taking control of the Park’s development.

A large number of people showed up for the meeting, which was announced to be held in two adjoining conference rooms; one of those rooms, however, was being used for a medical meeting. Consequently, it was standing room only for latecomers, with many crowding an adjoining stairwell. Following Commissioner Benepe’s address, in which he detailed further City plans for the Park, including a possible new floating swimming pool, he invited questions. The first question was whether the City would continue to plan to fund Park maintenance through residential and hotel construction on Park land. Mr. Benepe replied that this was the present plan, but noted that funds from new construction would not be needed for some time, as funds from the existing 340 Furman Street were sufficient to cover projected maintenance costs for several years. Asked whether the City would adhere to the present commitment to limit residential and hotel use to ten percent of Park land, he said that it would.

Many of the succeeding questions were prefaced by pleas that the City reconsider funding Park maintenance from residential construction, and that the planning process be open to community participation. Mr. Benepe said the City was always willing to consider alternatives, and that dialogue with the community would continue.

Mr. Benepe also stressed the role of the State’s Public Authorities Control Board in reviewing the terms of any agreements with developers concerning residential or hotel construction in the Park. State Assembly Member Joan Millman, who was present along with representatives of City Council Members elect Steve Levin and Brad Lander, added that she and Sen. Squadron would also have oversight.

At the outset of the meeting, Sen. Squadron said he hoped it would serve to “lower the temperature” of discussion concerning the Park, and lead toward consensus. Asked afterward what he thought it had accomplished, he said he believed it had convinced most of those who attended that “change is possible”, and that the City had expressed its willingness to listen to, and consider, concerns and proposals from the community.