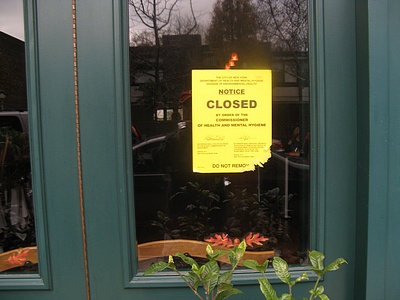 Not only was Le Petit Marche’s re-opening for a private party this weekend not permitted, the restaurant failed a re-inspeciton today, according to officials at the Department of Health.

During today’s re-inspection, officials found mice droppings as well as conditions for mice “harborage.” In order to re-open the restaurant must pass another re-inspection.

While the restaurant claimed over the weekend the shut down was a result of a clerical error, the DOH stood firm and said the restaurant had failed three inspections since August.

Le Petit Marche did not have permission to re-open this weekend as they accumulated over 28 or more violation points on three inspections since August.