Tag Archives | hollywood in the heights

By Claude Scales on December 13, 2010 5:27 pm in Arts and Entertainment, Brooklyn Heights, Events

Back in January, the Brooklyn Heights Association inaugurated its “Celebrating a Century” series of events marking its 100th anniversary with “Hollywood in the Heights” a program about movie-making in the Heights. The program included a film montage of scenes from movies shot in the neighborhood, including The Age of Innocence, Burn After Reading, Moonstruck, Prizzi’s […] 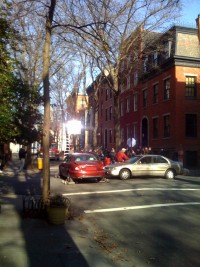 Damages Shoots on Willow and Cranberry

The FX drama Damages shot some scenes at the intersection of Willow and Cranberry Streets today.  As we mentioned earlier this week, a car crash filmed here is a focal point of this year’s story arc. When production assistants weren’t shooing away curious neighbors, they were apparently heaving dead leaves into the street to dress […]

Remember Me, Filmed Partially in Brooklyn Heights, is 9/11 Fable Probably Not for You

Remember Me starring Twilight‘s Robert Pattinson was shot here and around Brooklyn last year causing mobs of fans to crowd each location to catch of glimpse of the actor.  However it’s twist ending is probably not the sort of surprise that many Brooklyn Heights residents would enjoy. The movie opens today and reviews aren’t so […]

The third season of the FX drama Damages is chock full of scenes shot in Brooklyn Heights and DUMBO.  Playing a crucial role in the time shifting script this year is the t-bone car crash filmed on Willow and Cranberry Streets in November. Parts of it are featured in the promo above with the full […]