You won’t see “frontrunner” Steve Levin in the BIT piece on the race for the Democratic nomination in the 33rd City Council District.  You will, however, see Brooklyn Heights’ Doug Biviano. Tomorrow, the New Homer Fink Show will broadcast live from Biviano HQ on Montague Street.  He’ll be taking our questions but more importantly yours […]

Chuck Joins the Machine and Backs Levin in Council Race

The Brooklyn Paper reports that Senator Chuck Schumer will be announcing his support for 33rd City Council district candidate Steve “the Machine” Levin this Friday at Borough Hall. “This is a very big deal,” said Assemblyman Vito Lopez (D-Bushwick), who is not only the Brooklyn Democratic Party chairman, but also employs Levin has his chief […] 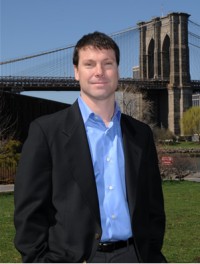 The New Homer Fink Show – LIVE and In Person Saturday

The New Homer Fink Show hits the road this Saturday (8/8) as we podcast live from 33rd District City Council candidate Doug Biviano’s campaign HQ on Montague Street. The Brooklyn Heights resident is one of the “Herd for the 33rd” and recently made headlines when he accused his opponents of being part of the “Democratic […]

Biv Against the Machine

The Herd for the 33rd City Council District met last night, minus a couple of sheep, for a debate in Williamsburg.  The Brooklyn Paper’s Ben “The Other Guy” Muessig was on the scene and reports that our homegrown candidate, Doug Biviano was quite animated to say the least:

Democratic NYC Council candidate (D33)/ Brooklyn Heights resident Doug Biviano  announced today that he is starting a petition to provide a temporary playground for P.S 8 kids.  They’ll be losing their current school yard due to an expansion project announced earlier this year. And as election year attention getting ploys go, this one doesn’t seem […] 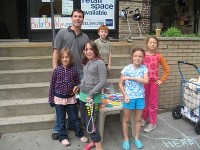 Council candidate and Heights resident Doug Biviano, along with a bevy of helpers, spent yesterday afternoon in front of his soon-to-becampaign headquarters in the former Red Blue Rose space at Montague and Hicks streets, collecting signatures for his petition to be put on the ballot for the 33rd Council District. The colorful, hand-painted seashells on […]

New Kings on the Block

The seven candidates for City Councilman David Yassky’s 33rd district council seat went head to head on Tuesday night, and the winner? Democracy. There were also a few good laughs, though solely at candidates’ expense. “Let’s do this every Tuesday night,” said candidate Evan Thies, with only a slight glimmer of sarcasm. The New Kings […]

It’s a big week for local government! First and foremost, the New Kings Democrats will host its debate for the 33rd district city council race in Williamsburg tonight at 7 pm, at Harry Van Arsdale High School Auditorium (257 North 6th St. at Havemeyer Street). All seven candidates have promised to show up, and North […]