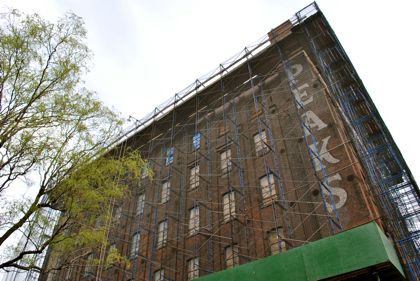 After news erupted yesterday about the ill-fated 20 Henry development — AIG, its financier, is suing the developers to regain control of the property  — BHB headed over to the scene to check out what neighbors have to say. We also took some photos of the building’s current state (and of the closed sales gallery), which are after the break.

Daniel Palladino, 48, who lives on Hicks Street, likes the premise of the reconstruction project, but admitted that this one is in a sticky situation. “I think it’s great that they don’t tear down these old buildings — but if they ended up abandoning this building, it’d be worse,” he said. “I think it would have been better not to start than leave it like this, and if they bug out and there’s no financing, then it becomes a hazard and a blight.”

And then we found three residents from 65 Middagh St., the building next door to 20 Henry’s western wall, arriving home. The residents didn’t want their names in print, but had a lot to say:

1: “It’s just a general mess, it’s an eyesore, and it’s dangerous. If they couldn’t finish what they started, they should not have started. What we had before wasn’t great but it was better than this. There’s a certain problem with mice, and it’s left in this state of neglect. We park our cars under the scaffolding, and the idea was we’d be inconvenienced for three months, but now it’s been a long time.”

“It makes an already chaotic block even more complicated,” the resident added, pointing to the fire station across the street, a church, and PS 8 at the far western end. “It’s a tricky block.”

2: “This is a sign of the times. It’s a sign happening all over the country. The canary-in-the-mineshaft really is that they’re paying rent on the scaffolding, and we’re in bad shape if it’s in this shape as long as that’s up.”

3: “It is kind of frustrating! I wish we had neighbors. And, when it rains, water comes pouring out of the building all the time” because of leaks in the unfinished building.

Another neighbor, Adam Obinger, 25, lives around the corner on Henry Street and was more at peace with the construction site. “I’ve just gotten used to it — it’s ugly, but it’s been up for a long time now,” he said. “There’s no progress being made, so I wouldn’t mind seeing work start and it finish, or [the scaffolding] just coming down. I’m fine with the building.”

Albert Tablante, 63, an attorney walking down Middagh Street, called the building “an eyesore.” “You have all the scaffolding and the netting and the sidewalk protection, which could be here forever,” he said. “The other question is, how long will this temporary support be here before it collapses?” 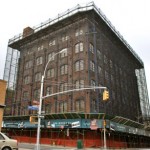 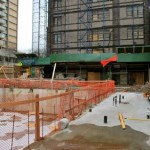 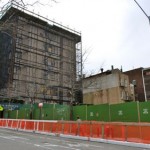 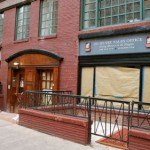 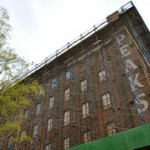