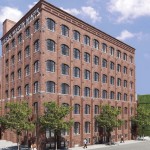 According to Brownstoner, troubled financial and insurance giant AIG, which provided nearly $10 million in equity funding for the redevelopment of the “Candy Factory” building at 20 Henry Street into luxury condos, has sued the developers for breach of their contractual obligation to cover overruns in the cost of the project. In its suit, AIG seeks to compel the three individual developers to pony up an additional $20 million to cover current and projected costs, and to invoke its right to take over the project.

Sales were halted on the project in March.

Thanks to reader Publius for the tip.