A Walk Through Red Hook

This past weekend your correspondent participated in two Jane’s Walks, sponsored by the Municipal Art Society of New York. The walks, which are free, are funded in memory of Jane Jacobs, an urbanist who lived for many years in the West Village and who advocated a community based as opposed to a centrally planned pproach to urban development.

My first walk, on Saturday afternoon, was through Red Hook. I’ve been there before, many times, but I wanted to see what was happening there now. Red Hook was for many years a thriving port community, but containerization and the need to be adjacent to rail transport caused most ocean freight activity to move to New Jersey. It has now become a magnet for artists and other creative people who don’t mind its remoteness from rapid transit. It does have the B61 bus that, after a long, slow ride gets you to or from the subways. As you would expect in such a community, Red Hook has lots of little restaurants, shops selling various crafts, and two(!) small, independent bookstores.

I arrived for the walk a few minutes late, but fortunately spotted the group waking along Van Brunt Street (many streets here have the names of the Dutch families who were the original European settlers in Brooklyn). I caught up with them just in time to ask the walk’s leader, Guy, about the dinosaur sculpture in the photo above. “It’s a metalworking shop,” he explained. Certainly a very creative one. 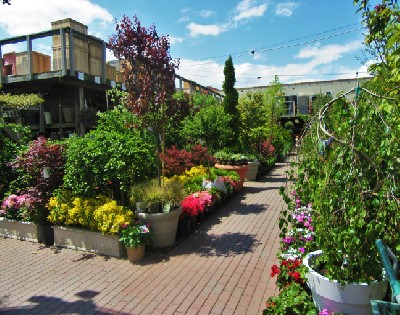 The stretch of Van Brunt Street on which we were walking was home to many plant nurseries. 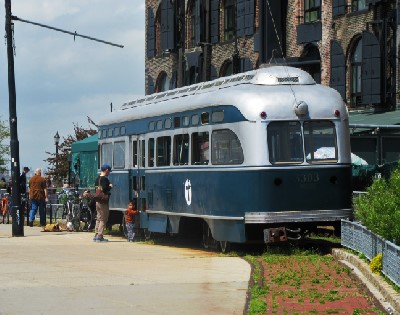 When we arrived at the foot of Van Brunt, we found, behind the nineteenth century warehouse building that now houses a Fairway store, a vintage Boston “T” trolley car. It’s the last remaining of three cars – see my eariler post for a photo – that were located here. 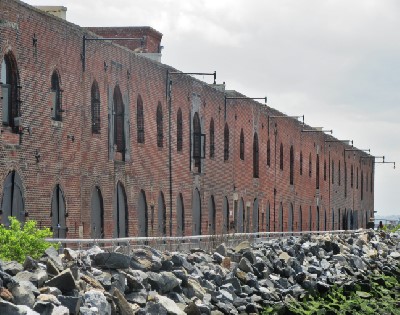 Here are some of the nineteenth century warehouses that line much of the Red Hook waterfront. Some still serve as warehouses; others have been converted to art galleries and other uses. 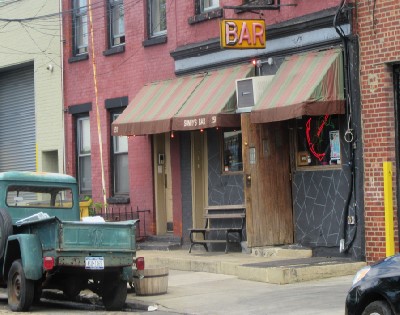 Sunny’s is a classic dive bar. It originally served longshoremen and sailors – note the anchor in the window. In recent years, it became a favorite of the creative people settling in the neighborhood. It’s owner, Sunny Balzano, died last year. His widow is trying to save it by raising funds to buy the building. 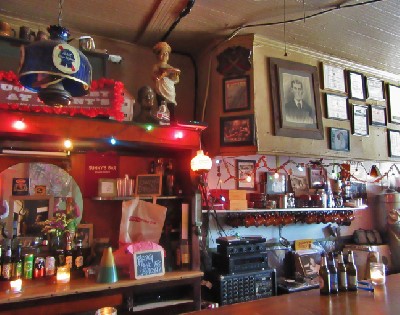 Here’s a view of the interior of Sunny’s. 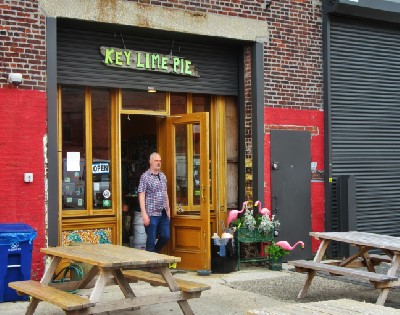 Steve’s makes the best Key Lime pies north of – well – Key West. I’m not sure if that’s Steve standing just outside the doorway. 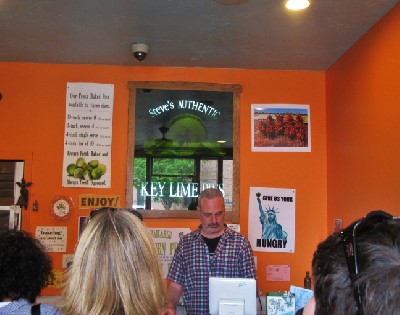 Whoever he was, he was soon busy serving a bunch of hungry walkers. His little pies dipped in chocolate are amazing. 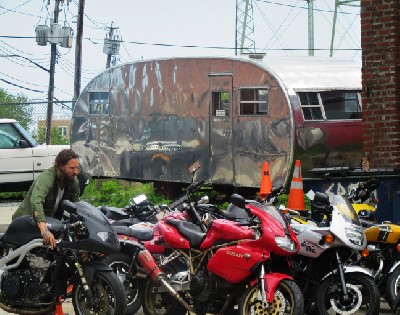 Next door to Steve’s is a motorcycle dealer and repair shop. In the background was a classic shiny aluminium travel trailer. 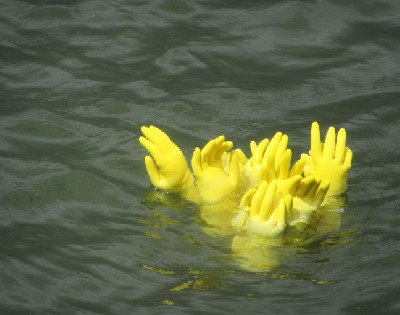 The Thing found floating in the harbor. 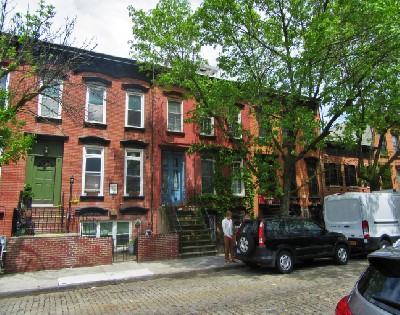 These tidy little nineteenth century row houses may once have been the homes of longshoremen who worked the Red Hook docks. 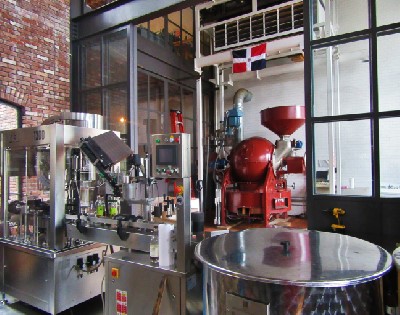 The Widow Jane Distillery makes fine Bourbon whiskey in Red Hook. It takes its name from the Widow Jane Mine, a limestone mine in Upstate New York from which comes the water used to make the whiskey. The photo above, though, is of its Cacao Prieto Distillery, which makes chocolate bars and cacao based liqueurs and rums from Dominican cacao (hence the Dominican flag). 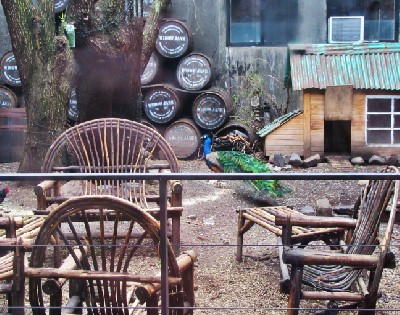 A peacock and several hens strutted in the garden behind Widow Jane. 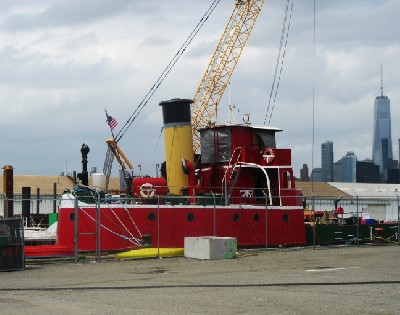 The Mary A. Whalen is an historic coastal and harbor tanker, one of the last of her kind, docked in the Atlantic Basin at 175 Clinton Wharf. She has been preserved by PortSide NewYork, and is the site of many public events. 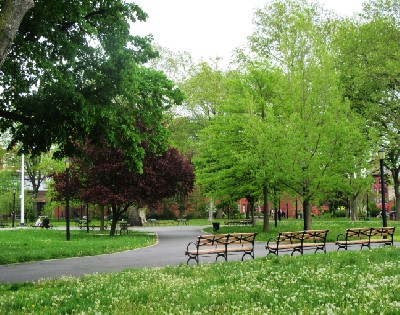 Coffey Park is at the heart of the Red Hook neighborhood, providing 8.27 acres of green space. 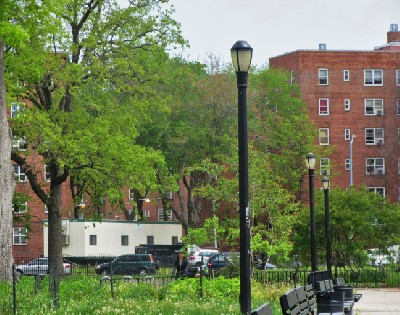 The Red Hook Houses, a public housing project, is to the east and south of Coffey Park. Red Hook is mostly just a few feet above sea level, and suffered flooding during Hurricane Sandy in 2012. The boilers in the basements of the Red Hook houses were rendered unusable by the flooding, The trailer in the lower left of this photo contains a boiler that provides service to the nearby buildings. The Housing Authority plans to build a central plant above the flood level to supply heat and hot water to all the buildings. 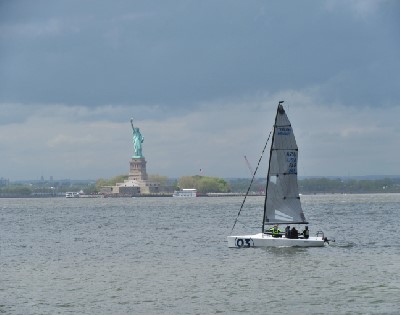 One of ONE°15 Brooklyn Sail Club’s sloops sails past Red Hook’s Valentino Pier, which commands a superb view of the Statue of Liberty.

On Sunday, I took a Jane’s Walk through our own Brooklyn Heights. It was led by Sandy Ikeda, a Heights resident who is a professor of economics at SUNY Purchase. Sandy is a great advocate of Jane Jacobs’ views on what makes cities and neighborhoods work, and has some interesting thoughts about the effect of creating landmarked historic districts like the Heights. I’ll be doing a separate piece about that walk, so stay tuned.