I first knew of Peter Stampfel as part of the Holy Modal Rounders (you can hear them here). On Saturday afternoon, April 29, Peter (second from right in the photo) took the stage with his group, the Ether Frolic Mob. Their set was full of wonderful Stampfel goofiness, including “Killed by the Car,” a paean to the joys of eating roadkill, and “Demon in the Ground,” a takeoff on “Spirit in the Sky”, a 1969 hit for Norman Greenbaum (I remember a WRKO Boston DJ playing that song, then saying, “At least he didn’t change his name to Rex Wonderful, or something like that.”) 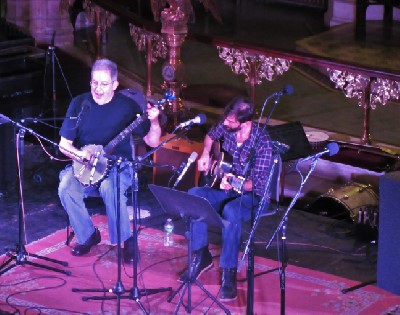 Jalopy Records has released an album, on vinyl only, of the late Clarence Ashley, recorded live at Gerdes Folk City in Greenwich Village in 1963. To celebrate the album’s release, the Folk Festival included in its Saturday afternoon schedule some songs done by Clarence Ashley. In the photo above are Peter K. Siegel on banjo, who was responsible for making the recordings of Ashley at Gerdes, and Eli Smith on guitar, organizer and emcee of the Festival. They did several Ashley songs, including one that Siegel described as “absurd” (but in a delightful way), “I’m the Man That Rode a Mule Around the World.” 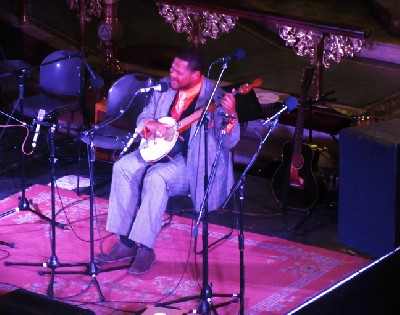 Jerron “Blind Boy” Paxton also did an Ashley song, “Walkin’ Boss.” He returned to the stage Saturday evening to do a complete set of songs spanning the blues, Appalachian, and ragtime traditions. 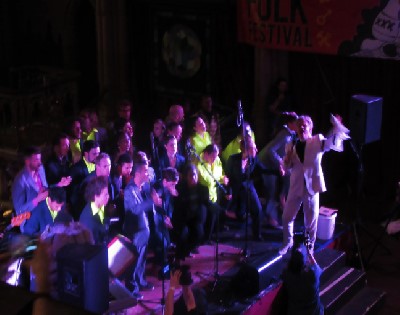 Also on the Saturday evening program were Reverend Billy and the Stop Shopping Choir, who did several lively, Gospel-style numbers, climaxing with “End of the World.”