The eighth annual Brooklyn Folk Festival began Friday evening, April 28 at St. Ann & the Holy Trinity Church with the poet Anne Waldman (photo) reading her poems, accompanied by her nephew, Devin Brajha Waldman on saxophone. She closed her set by singing a poem by William Blake that had been set to music by Allen Ginsberg. 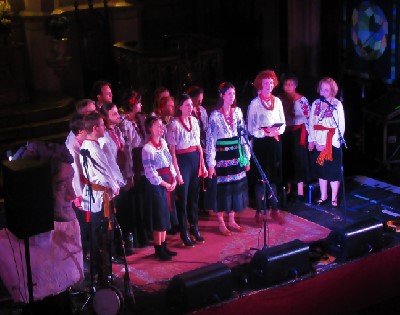 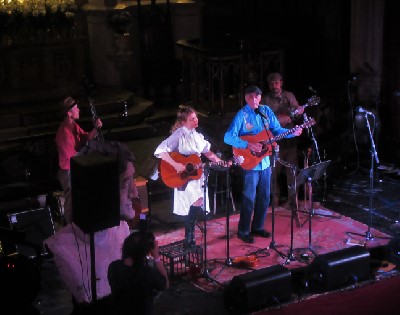 Jim Kweskin has been a constant on the folk scene since the mid 1960s. He has an eclectic style that ranges from jug band through blues, jazz, and pop standards. In the photo above, he opened his set, along with Meredith Axelrod (more about her in Part III), doing “Eight More Miles to Louisville.” Among the other songs he performed, with various other singers and musicians, were a new (to me) version of the blues and R&B classic “Staggerlee” and the pop standard “Swing on a Star” set to a ragtime tempo. 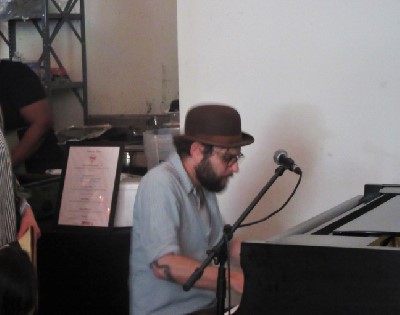 One of the acts appearing in the Parish Hall instead of the Main Stage (the chancel area of the church) was St. Louis barrelhouse piano ace Ethan Leinwand. 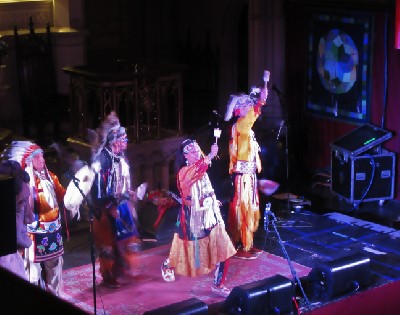 The Thunderbird American Indian Dancers performed dances from the traditions of various Native American nations. The photo above shows a dance of the Iroquois, who lived in what is now the northeastern United States. 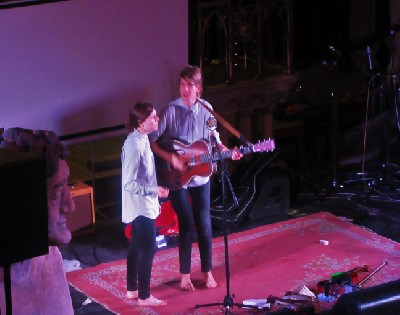 Anna and Elizabeth are Anna Roberts-Gevalt (at right in the photo above), a Vermont native and now Brooklyn resident, and Elizabeth LaPrelle, a native and still resident Virginian. Their repertoire includes songs from both the northern (New England and the Maritimes of Canada) and southern Appalachian traditions. Their harmonies are breathtaking. 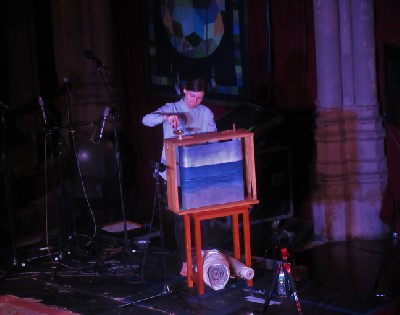 On several of their songs, Anna and Elizabeth augmented their music with a combination steampunk and techno video display. In the photo above, Elizabeth cranks a device that makes an artistic image roll across the front… 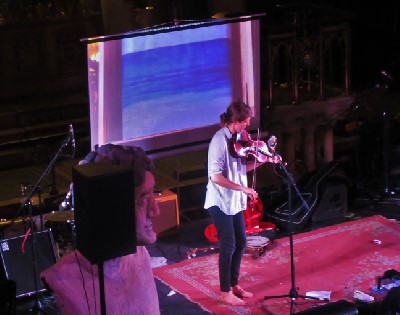 …while a digital camera captures the image and transmits it to a screen. The photos above show imagery that accompanied “Farewell to Erin,” an Irish song about emigration to America that Anna learned from her grandmother.

This covers Friday night’s action. Come back for coverage of Saturday and Sunday, including the Banjo Toss!