Your correspondent got notice Monday that at 1:00 p.m. yesterday there would be a ribbon cutting by Schools Chancellor Carmen Fariña for the new Dock Street School, a public middle school (grades 6 through 8), drawing “a diverse student body from Bedford-Stuyvesant, Fort Greene, Downtown Brooklyn, DUMBO, Brooklyn Heights, Prospect Heights, Clinton Hill, Vinegar Hill and North Park Slope”, and including a Pre-K facility with space for 75 students. The school’s entrance is on Dock Street between Water and Front streets in DUMBO. Figuring it would work in nicely with my daily constitutional, I set out at 12:30, heading down the Promenade, then Squibb Hill, then Water Street to Dock.

I didn’t know what to expect, but imagined a short ceremony at the school’s entrance, so I showed up in my walking attire, t-shirt and cargo shorts (I need those extra pockets for my phone and camera). I arrived a few minutes before one, and no one was gathered outside, so I went in. There was a guard at a desk who cheerfully directed me upstairs. At the landing at the top of the staircase I was facing the school’s office, the rear wall of which displayed the sign in the photo above. I was greeted by a school administrator and told her I knew “STEM” meant “Science, Technology, Engineering, Mathematics” but didn’t know what “STEAM” meant. She said the “A” was for “Arts.” This is DUMBO; figures. Perhaps we have a mini Cooper Union here, though with no threat they’ll start charging tuition. 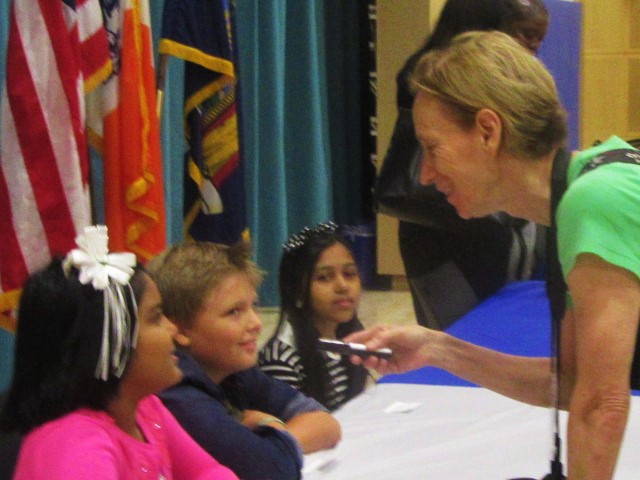 We were led from the landing outside the school office to the gymnasium, where we milled around waiting for various dignitaries to arrive. I regretted my tee and shorts, as everyone seemed well dressed, and the air conditioning was doing yeoman duty. Three students about to enter sixth grade at Dock Street were seated at the speakers’ table; they were interviewed by Mary Frost of the Eagle (photo above). Update: Here’s Mary’s story. 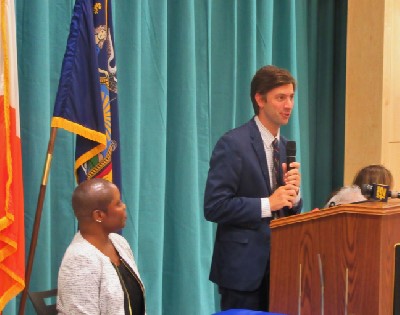 Among the speakers was City Council Member Steve Levin (photo above), who praised the various people and entities involved in making Dock Street School a reality, including the School Board and Chancellor Fariña, District 13 and Superintendent Barbara Freeman, the School Construction Authority and President and CEO Lorraine Grillo, and building developer and owner Two Trees Management and CEO Jed Walentas. To the left in the photo above is Dock Street’s Principal, Dr. Melissa Vaughan.

Mr. Walentas also spoke. As you may recall, there was considerable controversy over Two Trees’ proposal to build a high rise residential structure at the Dock Street site. He candidly acknowledged the crucial piece of advice he’d received from former City Council Member Ken Fisher: “Put a school in it.” Mr. Walentas said Dock Street School is “a model that shows how the City can leverage real estate values to create public benefits like building new schools, creating space for cultural institutions or updating infrastructure.” He said he hoped other developers would consider making space for schools in their buildings. 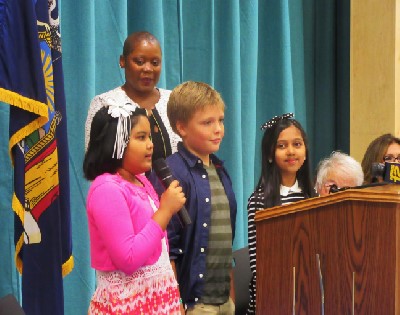 Dr. Vaughan called the three students to the podium. She said she hoped their experience at Dock Street would enable them to become “creators.” Each of them then said what they were anticipating as Dock Street students. One of the girls said she loves math, and looks forward to “making good grades.”