Dock Street DUMBO: What If… 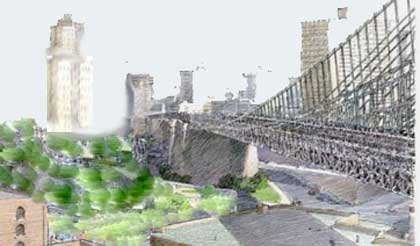 A quote by former NY City Councilman/super-attorney Ken Fisher regarding Two Trees and the Dock Street DUMBO project keeps repeating in my mind.  After CB2’s land-use committee voted no on the project – due to the building’s height among other things – Fisher told the Brooklyn Paper, “It is more likely that we would have to consider a commercial property and there would be no school.”

That’s one loaded sentence, eh?  You’ve got what could be a reference to a hidden agenda (“we would have to consider a commercial property”) and a teeny tiny bit of what could be fear mongering (“there would be no school”).

What is bugging me is that it appears that the approval needed for a zoning change and the height issue – as far as my small brain can tell – is relevant only in the discussion to change the project’s status from commercial to residential.   So can Two Trees build whatever it wants under the auspices of a commercial structure?

And if that happens,  the opposition will chime in and claim that the transient nature of a commercial building’s tenants and visitors poses a terror threat to the bridge. Oy vey.

All the issues here add up to one conclusion – no matter what gets built there, it’s gonna suck.

Therefore, I am suggesting a very simple solution.  Two Trees must immediately donate the land to the state as part of Brooklyn Bridge Park.  Face it guys, preserving a pretty carousel only goes so far in convincing the community that you care about “preservation” and “quality of life”.

I know this is tough talk, but you Walentas can handle it.  Choosing to be mensches here is a good thing for you.

Just think of the press, the good will and the pretty green space the neighborhood YOU CREATED would have.  As a matter of fact, I’ll give you the first line of your press release:

“Two Trees Management announced today that it has chosen to donate the Brooklyn land ear marked for its Dock Street DUMBO Project to New York State and the new Brooklyn Bridge Park.  “In the end we felt that respecting the historical significance of the Brooklyn Bridge served the community and our legacy best.  Letting our dream project go was a small price to pay.” Jed Walentas says.

But wait it gets better, here’s a fantasy report from BHB of the Future:

New York City Public Advocate Bill DiBlasio and New York City Councilman David Yassky announced a plan today for a middle school to be built at the site of the old 84th Precinct House on Middagh Street in Brooklyn Heights.  “We’re happy that we found a way for the City to work with Two Trees in turning the precinct into a much needed school for our children,” Yassky said.  “Sometimes those in government and those in the private sector are able to get together and find a way to do the right thing.”