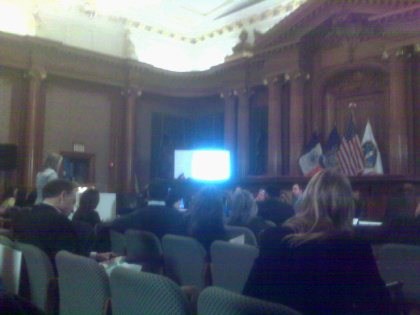 BHB Tipster “MP” tells us that it’s a “full house” at the Brooklyn Borough President’s hearing on the Dock Street DUMBO Project.  He adds that there seems to be a “few more people/groups” speaking against the project.

The first speaker, Councilman Bill DeBlasio (D–Park Slope), joined his Brooklyn Heights colleague David Yassky in objecting to the project. But DeBlasio stuck mostly to what he said was not enough below-market-rate units in the project, which currently sets aside 65 of its 375 apartment as “affordable housing.” “The city needs to move towards greater affordability than 20 percent,” he said.

Other opponents painted Walentas, who has spent, by his own estimate, more than $100,000 to lobby city officials over the past two years, as a man who sweetened his rejected project from 2004 with a public middle school — and then convinced city officials that this was the best offer they could get.

Update: Our tipster adds:
It was a full house in the main hearing room at Borough Hall tonight as Borough President Markowitz held an open hearing as part of the Uniform Land Use Review Process for the Dock St. DUMBO project. I saw a cameraman from Channel 2 new covering, and some of the local press.

It was a well run meeting where those wishing to speak received 3 minutes on a podium directly facing Marty and in the middle of the audience.

At least ¾ of the speakers were against the project as currently designed. The reasons included:

· It diminishes the Brooklyn Bridge

· The proposed school with only 300 seats would be inadequate for the current and future demand, with no expansion possibility on the site.

· The proposed school would be directly underneath a 400 car garage, and also next to the Brooklyn Bridge, which in the past has been a terrorist target.

· The process to choose a school for the district has not been transparent.

· The project is not contextual for the area.

· Many others such as traffic, bad place to put a school in a flood zone,

Judging by applause from the audience, at least ¾ in attendance were against the project.

A CPA with many years in real estate gave a fiery speech accusing the Walentas’ of greed and duplicity when they claim they cannot make a profit on the site if the development is below the roadway of the bridge and offered his own study to Marty and his time to review the numbers.

Most of the parents of local school age children were against the project (BHB’s own contributor Carlo Trigiani was among the only exceptions).

Many speakers pleaded with the Beep not to tarnish Brooklyn’s legacy and his legacy.

Marty seemed to remain awake and engaged while rocking in his high backed leather chair throughout the entire hearing.

David, Jane, and Jed Walentas were all in attendance (Jed didn’t dress like a schlub for this one and appears to have shaved). Hard to tell, but I think that Dumbo’s First Family was surprised at the opposition to the project and the criticism they received.

The usual merchants who have benefitted from Walentas largess over the years spoke in favor of the project.