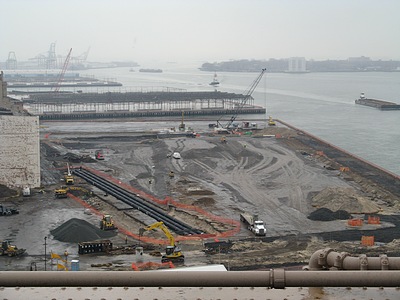 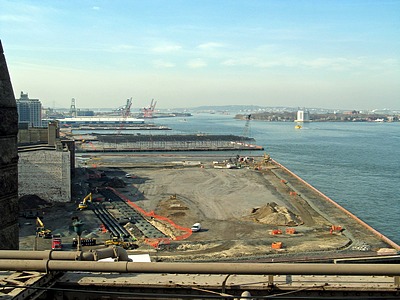 Friday, March 27, 2009. According to information we’ve received from Lisa Willner of Empire State Development Corporation, those 3′ diameter pipes being placed and buried in trenches are for storage of storm runoff, to be used for Park irrigation. Willner also advises us that the fill being trucked in to build the hills is “excavated from the East Side Access project in Sunnyside, Queens”; i.e., from construction of the tunnel that will allow the LIRR to connect to Grand Central Terminal. Finally, she notes:

The first phase of park construction at Pier 1 will include about 1300 feet of promenade along the East River, and 2.5 acres of lawn with breathtaking views of the New York Harbor and the Brooklyn Bridge. The site will also include the first portion of the Brooklyn Greenway, which will ultimately link to a future borough-wide bikeway network. Pier 1 will include lush planted areas with approximately 700 new trees, water gardens and a playground. Once completed, Pier 1 will add 9.5 new acres of park to the already existing Empire Fulton Ferry State Park and the Main Street City Park, and is expected to be open to the public by the end of 2009.

As a bonus, here’s a closer view of work near the south end of the Pier, as seen from the Promenade. 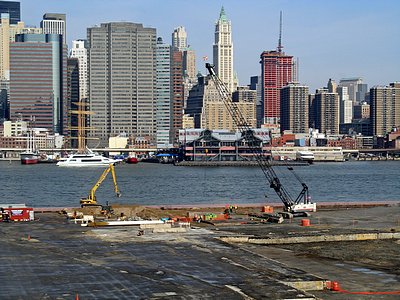