Wednesday night the DOE’s Office of District Planning (ODP) rolled out their Official Rezoning Proposal for P.S. 8 and P.S. 307 at a densely-packed public meeting held at P.S. 307.  The zone lines, previously presented in draft form at two Town Hall meetings on September 16th at P.S. 307 and September 21st at P.S. 8., remain the same.  The plan draws the line of demarcation along the Brooklyn Bridge shifting Dumbo and Vinegar Hill from a P.S. 8 to P.S. 307 zone.

The DOE’s rationale for the re-zoning also remains the same.  The DOE would like to grow P.S. 307’s zone size to “generate a stable and reliable enrollment.”  Conversely, they would like to alleviate the wait-list at P.S. 8 and provide families with “more opportunity to anticipate options.”  P.S. 8’s capacity is currently at 143% with a total enrollment of 741 students.  While P.S. 307’s building, which houses 372 elementary school students and 81 middle school students, utilizes 58%.

After the presentation, comments were made by the CEC panel, multiple elected officials, community organizers and parents alike.  Familiar themes were voiced: the short time frame allotted for discussion and implementation of re-zoning, lack of community engagement, allocation of funding and resources for each school, impacts of widespread residential development and yes, race and class. Mostly, the ire was directed squarely at the DOE.

Maggie Spillane, citing the many requests to postpone the re-zoning vote, did “not think a delay is necessary or helpful” and that “certainty will help provide some motivation for some people to come to the table” for community bridge building.  But she shared Rob Underwood’s views on the need for clarity surrounding the M.S. 313/I.S. 611 plan.  Underwood proclaimed, “The biggest problem in District 13 is NOT the overcrowding at P.S. 8. Period…The number one issue in District 13 is middle school quality.…I do think there is some merit in the P.S. 8 and P.S. 307 re-zoning, but it is inextricably linked to the I. S. 611 plan and until we have a detailed, concrete, specific plan for I.S. 611, I could not vote yes for the re-zoning. ” 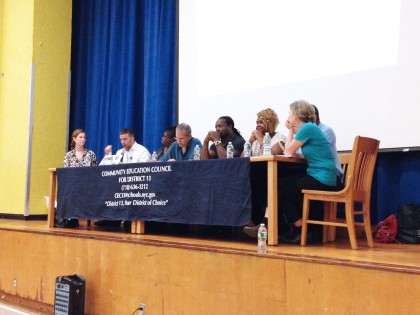 Vascilla Caldeira shared, “We are not just tools for the DOE…we are accountable as parents. We are accountable as a CEC to look at ALL the avenues that are presented to us.” CEC President David Goldsmith added, “I think that it’s clear that we have a big challenge in 307, P.S. 8 and Downtown in general….our history is exacerbated by a history of poor planning by the Dept of Education [and] uneven development in our schools.” Goldsmith, however remained optimistic, “what I see, what I hear is that families are ready to stand together and fight for each other’s children.”

Ed Brown, whose verdict on re-zoning is “still out,” was sympathetic to P.S. 8’s overcrowding but lamented (to loud applause) about “under-served” and “under-utilized schools” in District 13.  Adding, “You cannot force parents who have made up their mind that they’re not going to send their children to schools that service a certain segment of the population…that they are not going to go into schools that have leadership of color.”

Renee Burke, a P.S. 133 parent, echoed Ed Brown’s sentiments, “We have to figure out the real method, program, solution for growing 307 in the right way. And that goes for all of our schools in the district because we shouldn’t be fighting among ourselves about who’s going to get what…NYC is suffering and that’s because we’re not spreading [out resources] so that everyone has the same playing field. If the DOE is committed to making our schools better, they have to be committed to getting the resources to the schools.”

Ben Greene, both a long-time CEC member and P.S 307 PTA Co-President, directed his comments toward the ODP, “You made the statement that larger enrollment brings more money.  But not always…I want to see the money upfront, I want to see the resources up front. …What will the DOE do to support P.S. 8 if this proposal is voted down?…What are resources that the DOE is going to commit to 307 if this rezoning proposal is voted yes? We need more information on the development. Right now we’re getting very vague information.”

PTA’S & COMMUNITY ORGANIZERS HAVE THEIR SAY:

Former P.S. 8 PTA Co-President, Ansley Samson spoke on behalf of the school, “We wish this had happened differently. We wish the DOE had presented this information earlier…we want to come together and support a process…that works for the community currently at P. S. 307. We believe this happens better with planning and certainty now.” 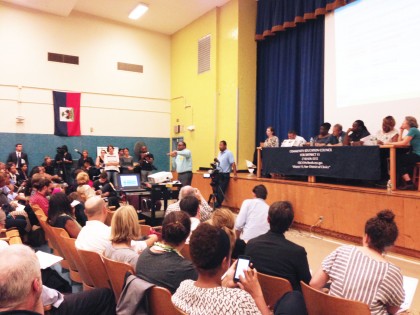 Speaking on for the P.S. 307 PTA, Co-President Faraji Hannah-Jones explained, “We would have liked to have been consulted with first to see how and what we want out of this proposal.”  He evoked the legacy of “those people that have been here [in the community] and gone through every struggle known to the history of Brooklyn” adding, “we need more time.”

Rev. Dr. Mark V. C. Taylor, Pastor of Church of the Open Door began simply, “This is a bad plan.”  He laid out multiple points of opposition and garnered many shout outs from the audience.  He crescendoed with “It is perhaps the case that all of the tensions are not based on race. But to say race and class are not issues and that we’re just going to grow and everybody automatically flows together is just naïve at best, dishonest at worst.”

State Senator Daniel Squadron did not mince words, “The Department has compounded terrible planning-actually no planning-with insufficient public information, a failure to bring together the P. S. 307 and P. S. 8 communities for real dialogue and a disrespectful lack of sensitivity to the inevitable concerns [of] parents…If you feel like DOE has pitted neighbors against neighbors, it’s because it has.” Squadron urged, “DOE must work with stakeholders to have transparent data-driven conversations about new and existing elementary and middle school capacity and the impact on families’ schools and equity BEFORE we get to this point. Not after.  We cannot have this conversation again in five years…” 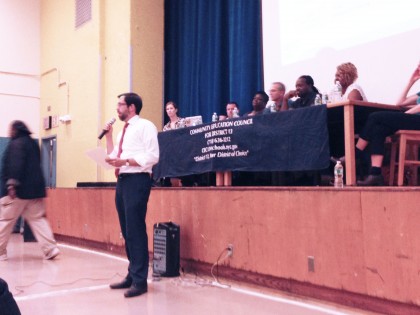 During his remarks, Councilman Steve Levin referenced two meetings held last year. “About a year ago, the engagement with the P.S. 8 community began in fits and starts,” citing the initial Overcrowding Town Hall organized by the P.S. 8 PTA in November 2014 and held at Plymouth Church.  The second was a Community Engagement Meeting held at P.S. 287 in May where Executive Director of Space Planning, Thomas Taratko expressed regret for not re-zoning P.S. 8 two years ago, making it apparent to those in attendance that re-zoning would be “likely.”  Levin continued, “there was no real effort to reach out to the 307 community [after these meetings] and that should have happened….it is totally reasonable that members of the 307 community feel blindsided and rushed by this whole process.” However, Levin “cautioned against doing nothing” about P.S. 8’s overcrowding saying, “allowing it to continue status quo is not a substitute for proper planning and we have a responsibility for all families and children to have a predictable framework.”

Parents and residents from both the 307 and 8 communities alike universally panned the timing, lack of community engagement and scant implementation details offered in the proposal.  Confusion surrounding sibling grandfathering persisted and was clarified on at least two occasions during the meeting.  Questions about the resources allocated to each school were top of mind.

A father who identified as a Dumbo parent felt the DOE had “taken the right thing to do and completely messed it up.” He pressed, “How are you going to preserve what’s good about [307]…How can what’s good at P.S. 8 be brought down the hill? Stop talking to us like administrators, start talking to us like educators…tell us how our kids will be better off in the new 307 that you are proposing. Tell us what your plan is to bring us together.”  Michael Higgins Jr, speaking on behalf of FUREE (Families United for Racial & Economic Equality) inquired, “How will programming be maintained and improved if 307 loses it’s title 1 funding [due to demographic changes in the student body]?  Will the school lose it’s free lunch funding?”

Cheryl Goodman, a long-time Farragut resident whose children attended P.S. 307, spoke to several points that concern her community.  Among them, the deep seeded fear that both children and funding would be displaced from 307.  She placed the blame on the DOE for under- funding the school, allowing Charter schools to pilfer students and not reacting appropriately to rapid residential development.  “Somebody [at the DOE] didn’t do their job when the industrial area was re-zoned for residential,” a point that all communities can agree upon. “The Department of education should have immediately considered the amount of families that would be coming in and what that would do to the education of the children that they’re responsible for.”

Ms. Goodman concluded, “[307]  is a viable school. It is an excellent school. It was rebuilt. So NOW it’s attractive? It’s a magnet school. Anybody can come if they want to…if there’s room you can come. So the rezoning is not necessary because you have a choice.”  Matt Tartaglia, a Dumbo resident of eight and a half years and the father of a three-year old, is also against the re-zoning at this time.  He reiterated that neither Farragut nor Dumbo families have had “a seat at the table” adding, “We [Dumbo parents] all chose a neighborhood to live in, mostly based [on] the public school. Now we’re being told we can’t send our kids to this school. But we all understand what wait lists are. We’re all adults. We all make decisions, we all plan around it. But by telling us that our kids don’t even have an option [of P.S. 8] isn’t fair. I urge all of you to think about this.”

To re-iterate, the plan has not been officially endorsed by Superintendent Barbara Freeman yet.  Therefore, the 45-day voting clock has not started ticking.  The DOE, CEC and Superintendent Freeman are continuing to receive feedback. The public is encouraged to submit their comments, questions and concerns via the CEC webform.  Input will be sent to all parties simultaneously.  The next CEC meeting is Tuesday, October 20, 6:30 pm at P.S. 8, 37 Hicks St, Brooklyn, NY.

Full details of the re-zoning timeline, FAQ’s and a schedule of CEC meetings are available on the CEC website.  To receive regular updates from the CEC, enter your email address in the left side-bar of the CEC website.

CORRECTION: This post has been edited to reflect the correct spelling of CEC Member, Vascilla Caldeira’s name.

REVISION: This post has been revised to reflect that Councilman Levin was referring two two public community meetings and not the  private meeting held in February 2015 between the P.S. 8 PTA and The Office of Space Planning. (ASIDE: Representatives of incoming P.S. 8 parents had asked to be included in the February meeting but were not offered a place at the table at that time.  This correspondent referenced this meeting as an additional example of the DOE’s exclusion of key stakeholders).

DISCLOSURE: The author was an active member of a parent group that advocated for the 50 families wait-listed at P.S. 8.