On Wednesday night, at the first of two town scheduled town hall meetings, representatives of the DOE’s Department of District Planning presented their draft re-zoning proposal for Brooklyn Heights’ P.S. 8 at P.S. 307 in Vinegar Hill.  The proposal was presented to the CEC on September 1st.  As previously reported, it essentially cuts the current P.S. 8 zone in half and relegates all of Dumbo and Vinegar Hill to P.S. 307. Concord Village remains in the proposed P.S. 8 zone.  Greg Whitten, DOE Associate Director of District Planning explained the need to re-zone “began with the [Kindergarten] wait-list at P.S. 8.  We saw the zone was too large.”  Director of Planning, Tim Castanza added, “I feel comfortable saying the P.S. 8 zone is one of the largest in the Borough [of Brooklyn], even city-wide.  On the flip side, 307’s is one of the smallest.” In 2014 the current zones yielded 162 Kindergarten age students living within the P.S. 8 zone while 307’s zone had 17 students residing within its borders. 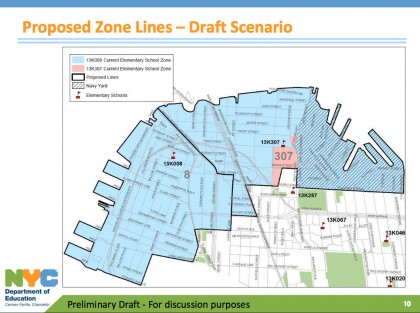 ELEPHANT IN THE ROOM:

Emotions ran high during the question and answer period and several themes emerged. Gentrification was front and center.  Rev. Dr. Mark V. C. Taylor, Pastor of The Church of the Open Door, was first to speak, at times to thunderous applause. “This plan is based on the needs of one community, P.S. 8. It is P.S. 8-centric. That also means, that it is ignoring the other community that is involved…There are issues of race and class that need to be figured out that are not here…we can come up with a plan that preserves the excellence and the leadership [of 307] that gives them time to work out their vision, does not send another group of people in here angry and ready to make changes and that brings all of us on the same page. Because, you don’t have a lot of institutions in America where the majority of white folk are willing to function under black leadership. That’s just the truth.”

A Farragut Houses resident and parent of a small child spoke passionately her voice breaking at times, “We fought hard to build this school. And we’re not just going to let people come from outside when we worked so hard and dedicated ourselves. Our blood sweat and tears are here…I don’t have no problem working with anybody. But I’m not going to let anybody take from my daughter. She is the future.”

Tiara Puglisi, an out-of-zone P.S. 307 parent commented, “My son is in Kindergarten right now. I think we’re talking about things, we’re dancing around. He is the only white child in his class. And that makes me feel like, ‘how are we going to integrate in a world where I would expect more white children in his class?’ But it doesn’t happen that way. And when kids can’t get into P.S. 8 you’re all decrying ‘my son didn’t get into pre-k!’ why aren’t you sending them to 307 now, like we are? So, I have a hard time thinking that it’s going to be a seamless integration because I haven’t seen that here so far.”


There were points on which attendees agreed: 1) The proposed re-zoning timeline is too short and 2) P.S. 287 should have been considered in the proposal.  P.S. 307 PTA Co-President, Faraji Hannah-Jones read a statement from a Farragut Housing resident which said, in part, “You’re going to overwhelm the P.S. 307 zone. And in a few years, we’ll be right back at the table to do this all over again. What is the rush? This process needs to be pushed back at least a year. Why is it that P.S. 287 couldn’t be in on the process?…This is putting a band aid on an open wound for temporary relief.”

Dumbo parent John Shook challenged the DOE  “I’ve gone to every single meeting about this and to bring [re-zoning] up on September first and try to implement it for next year is ludacrous.”  Another parent who identified himself as the parent of two boys said, “This seems like it was a very poorly thought out rushed process…we can say that Dumbo parents were really caught off guard by this and it appears from listening to the current 307 parents that they were also not involved in this discussion and that’s disturbing.”

Another Dumbo parent whose son received a spot in P.S. 8 in late August was compelled to share her experience, “we just went through a lot with P.S. 8 and my focus was going to be [on sibling grandfathering].  But I have to say with the way this meeting started, Ms. Davenport was so welcoming to us and as a wait-listed family she was so wonderful and she went on about how Dumbo was part of the bigger community.  I think as parents in this community it is our responsibility to teach inclusion and acceptance and to be one community.”

As the evening began to wind down, the DOE’s Tim Castanza referred to conversations he held with the previous P.S. 307 Principal Roberta Davenport (who retired at the end of the 2014-2015 school year), the Interim Principal Stephanie Carroll, 307 teachers and parents.  “I wish we would have had a little bit more conversation about the positive things that are happening in this 307 community…I don’t want it to seem like there’s this idea that we’re going to take. That we’re coming in and that this re-zoning is taking resources away…We have this really wonderful school community that we want to grow. And that we have confidence that can continue to grow and continue to be excellent for more students in this district. I want to acknowledge that what we already have here is excellent.”

CEC President, David Goldsmith was also hopeful, “One of the things that’s clear…this is really about our children and I think what we see in the room here is a lot of passion for our children.”

The CEC will hold their next town hall meeting this Monday, September 21st 6:30-8 pm at P.S. 8 located at 37 Hicks Street.  The community may also submit comments, questions and concerns via the form on the CEC website.   Comments sent through this form are forwarded to the Office of District Planning, District 13 Superintendent Barbara Freeman and the CEC simultaneously.

Feedback from the town hall meetings will be considered by the DOE as they prepare their formal proposal.  The DOE will then present its official proposal to the CEC and D13 Communities at the CEC’s next Calendar Meeting, on Wednesday, September 30th, 6:30 pm, at P.S. 307 (209 York St.).  There will be opportunity for public comment at this meeting as well.

The CEC is then required to vote on the official re-zoning proposal at a public meeting within 45 days of its presentation.  During that time, the community may continue to submit their feedback.  Full details of the re-zoning timeline and a schedule of CEC meetings are available on the CEC website.  To receive regular updates from the CEC, enter your email address in the left side-bar of the CEC website.

Join Our BBAWC at Brooklyn’s First Cat Cafe
An Imminent Opening for the Bossert?