The Elephant in the Room Part 2: Second Re-Zoning Town Hall Held at P.S. 8

On Monday night, the District 13 CEC and DOE’s Office of District planning held the second of two Town Hall meetings at P.S. 8 to present the draft re-zoning proposal for the school.   As with the meeting held at P.S. 307 on September 16th, issues of race and class emerged. Now, the debate has caught the attention of the The New York Times.  Published Wednesday morning, Race and Class Collide in a Plan for Two Brooklyn Schools, was the lead story in the N.Y./Region section.  The meetings have also been covered by the Wall Street Journal, Gothamist and DNAinfo, among others.

Comments centered around the need to include sibling grandfathering (a decision at the discretion of the CEC), attendees’ displeasure with the short time-line for approval and implementation, and lack of community engagement in the re-zoning process.  Some wanted to know the status of P.S. 8’s wait-list and current Kindergarten enrollment. Others implored the DOE to build more schools and were reminded by the DOE, CEC members and other speakers alike that capacity still exists in nearby District 13 schools including P.S. 307 and 287.  Some questioned why P.S. 287 was not included in the re-zoning draft proposal.

Enthusiastic applause erupted when Dumbo resident and father of a one year old asked, “Why is drawing a few lines on a map taking precedence over fixing a severely under performing school? I don’t want to be the bad guy in the room but nobody else wants to talk about it.”  The DOE’s Associate Director of Analytics, Jonathan Geis responded, “We don’t consider P.S. 307 to be an under performing school.  What we’re seeing is a wonderful learning community.” 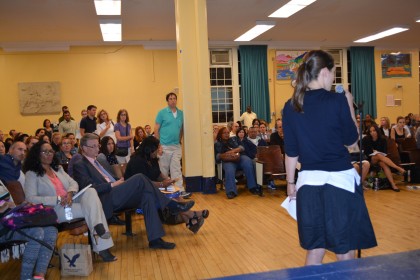 P.S. 307 PTA Co-President, Faraji Hannah-Jones, added, “P. S. 307 is not an under performing school. Let me get that straight right now. We have brilliant teachers, we have curious students, we have committed parents and we have champions for the community. Number one I want to address the elephant in the room being that it’s the Dumbo community. Have you been to the school? You’re using 307 to basically make your complaints about the process but you’re not once talking about your neighborhood school being 307.”

The DOE also revealed plans to introduce a proposal to relocate MS313, aka Satellite West Middle School, from P.S. 307’s building on York Street to the newly constructed Dock Street space in Dumbo. The school will also house 100 Pre-K seats.  (This proposal must be approved by the DOE’s Panel for Educational Policy, aka PEP, not the CEC).  The move would free space for additional elementary student seats at P.S. 307.  But that’s not necessarily good news for P.S. 307.  “Did you know that you will be stepping on the toes of a brilliant Pre-K program that is already going  [at P.S. 307]? We have 40 seats still open…this interferes with the progress that we have been working on in that community,” said Faraji Hannah-Jones.

But, what’s really at stake is Title 1 funding.  If the percentage of students who qualify for free lunch dips below 60%, the school stands to lose those funds and the programs they make possible.  According to CEC member and P.S. 307 PTA Co-President Ben Greene, P.S. 307 received approximately $284,000 in Title 1 funds last year, a figure not likely to be made up by PTA fundraising.

CEC Member Amy Shire said at the conclusion of the evening, “Whatever happens with rezoning, I don’t think anyone thinks that a re-zone is a magic bullet…whether or not it goes through, there are lots of issues that are inter-related but much bigger than the issue of overcrowding in Downtown Brooklyn.”  CEC Member Rob Underwood agrees and sets out his thoughts on the issue, as one of the members to vote on the rezoning, in his latest Tumblr post, Thoughts on the PS8 and PS307 #D13Rezoning.

While the DOE compiles feedback from the Town Hall meetings, the community may continue to submit comments, questions and concerns via the form on the CEC website.   Input sent through this form is forwarded to the Office of District Planning, District 13 Superintendent Barbara Freeman and the CEC simultaneously.

The DOE will present its official/final re-zoning proposal to the CEC and D13 Communities at the CEC’s next Calendar Meeting, on Wednesday, September 30th, 6:30 pm, at P.S. 307 (209 York St.).  There will be opportunity for public comment.

The CEC is required to vote on the official re-zoning proposal at a public meeting within 45 days of its presentation.  During that time, the community may continue to submit their feedback.  If there is no CEC regular Calendar meeting that meets this timeline, a Special Meeting will be called and announced to the public with at least 48 hours’ notice.  Full details of the re-zoning timeline, FAQ’s and a schedule of CEC meetings are available on the CEC website.  To receive regular updates from the CEC, enter your email address in the left side-bar of the CEC website.