By brooklynheightsblog on November 21, 2014 11:55 am in Brooklyn Heights, Education, Government

In case you haven’t heard, PS8 is overcrowded. The Annex, completed in 2011 was supposed to help. Instead it was filled to capacity almost the minute it opened. Add unchecked residential development and BOOM, the student population has exploded once again.

To ameliorate overcrowding PS8 did away with Pre-K for the 2014-15 school year and added a sixth Kindergarten class. But the enrollment numbers are proving to be unsustainable. Now there is a chance Kindergarten classes will be cut back from six to five classes for the 2015-16 school year. If that happens, it is projected five to ten children zoned for PS8 may be offered alternative placement and First through Fifth grade classrooms could ultimately swell to as many as 32 children. The DOE will not make a decision about Kindergarten until sometime in March. There is a lot of uncertainty and anxiety. Parents are heated.

Enter PS8 PTA Co-Presidents Kim Glickman and Ansley Samson. First, they mobilized awareness and created petitions for the Department of Education and our elected officials (sign them HERE. 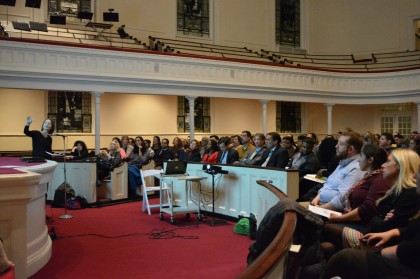 According to statistics compiled by Downtown Brooklyn School Solutions approximately 3,750 new housing units have been/will be developed between 2004-2017. Using the School Construction Authority’s “projected public school ratios” this translates into 1088 seats needed at PS8 between 2004-2017. However, these numbers EXCLUDE the proposed Pier 6 tower and Brooklyn Public Library projects. So the problem is likely much worse.

Parents were eager for the DOE and elected officials to weigh in. Thomas Taratko of the DOE offered “You have our ear already, now we are going to take all this back. There are citywide priorities. There are difficult decisions to be made. What I will assure you is that the process will be transparent.”

Throughout the presentation Kim and Ansley emphasized the importance of finding short and long-term solutions but also of working with surrounding communities to benefit the entire 13th District, not just PS8. This sentiment was shared by CEC President, David Goldsmith, “what I’m going to encourage everybody to do…is to look into other options…. We’ll do our best in the CEC encourage the bridge-building.”

Parents were not clear on what their other options would be and became frustrated. Daniel Squadron challenged Thomas Taratko to schedule a forum on Kindergarten enrollment and the promise of an early January meeting was made. 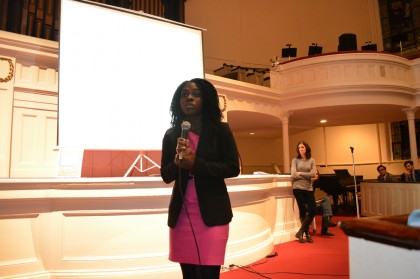 Once the floor was open for questions a concerned Mom immediately asked, “Is there any talk about re-shaping the zones?” Estelle Acquah of the DOE replied, “Nothing is off the table. We will be looking at that. In terms of that being implemented for 2015 just due to the admissions processes and the timelines for those that’s not feasible for 2015. But it is certainly on the table as a long-term option.”

A long-term Brooklyn Heights resident felt, “end of story” that the Brooklyn Heights Library should not be a high-rise but a public school. An opinion shared by outspoken resident Doug Biviano. “We need a moratorium on [the Library] until we solve the problem.”

PS8 Co-President, Kim Glickman is hopeful last night’s meeting will be a catalyst for change. “I was thrilled with the turnout of the meeting. It really showed our elected officials and the DOE that our community is highly concerned with the over capacity at our school. I hope this provides the momentum and the information that people need to find the right solutions for the fall and for long–term.”

So what can you do?