Numerous elected officials, the District 13 CEC, current and prospective parents from P.S. 8 and P.S. 307 convened in the auditorium of P.S. 287 this past Wednesday evening to hear the presentation by WeArePS8Too.  The parent group represents the fifty children wait-listed for Kindergarten at P.S. 8 and advocates for the restoration of the 6th section for the 2015-16 academic year in addition to medium and long-term solutions to overcrowding in District 13. P.S. 8 received over 200 applications for Kindergarten for 2015, 30 more than last year.  The school made 150 offers for 125 seats.  At present, enrollment stands at 125 leaving at least fifty children on a wait-list that is not likely to benefit from substantial attrition or movement. 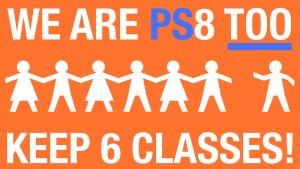 Michael Colby Jones, a parent of children who received placement at P.S. 8 began the presentation by painting a picture of families, friends and neighbors passionately invested in the success of their zoned school and dedicated to medium and long-term solutions to overcrowding.  “The moment that my wife and I knew that we were going to have kids, we would wander down to the [P.S. 8] fair every year and we would support it, because our children would be going there…I can’t tell you how many other parents who didn’t get in had the same thought.”  He continued by talking through a timeline of events leading up to the decision to cut the sixth section-a decision Jones insisted excluded their engagement.

Parent of a wait-listed child, David Margalit put forth the group’s reasoning behind their position.  Namely, the DOE violated their own Chancellor’s Regulations, which dictate non-essential programs may be “reduced or eliminated” to accommodate zoned students.   Their class size projection with the sixth section would still allow for the use of one cluster room, a model under which the school has operated sporadically in previous years.  Additionally, the DOE’s decision to cut the class in March 2015 vs. November 2014 (when the PTA Town Hall Meeting took place) was well after deadlines for other viable options had passed.   Lastly, the decision haphazardly separated children from their friends and community. Margalit’s choked up as he lamented, “It breaks my heart, when I hear my son say ‘next year I’m going to go to school with [my friends]’ who he has spent all this time with, growing up with them the last couple of years.  And we haven’t told him yet…we hope to never have to tell him [that he didn’t get into P.S. 8].”

Thomas Taratko responded to the group’s assertions explaining, “I’m not here to wave a magic wand and ‘say 6 sections, go ahead.’ I’m here to explain some of the thought process behind the decision-making.”  Taratko refuted the section cut violated the regulations, citing the elimination of pre-k the following year was the last non-essential program that could be cut.  He disputed their timeline and claims of wide gaps of communication from the DOE citing his meeting with the P.S. 8 PTA in February or March.  This sent murmurs through the crowd and prompted a shout out, “that’s wasn’t us!”

Taratko called the amount of development in Downtown Brooklyn “absurd” and said, “If I came to you in an apologetic tone, the apology would be that we didn’t step up to the plate a couple of years ago and re-zone the area around P.S. 8. It’s a huge zone.”  Yet, he downplayed any urgency for the School Construction Authority to build new schools in District 13.  “We have excess capacity in this area. A couple of hundred seats at P.S. 307, a couple of hundred seats at where we are here. So the building option is not the first one that we would do…this area is not the number one priority in the city.”

Councilman Levin took the floor and recalled the 2004 commercial re-zoning of Downtown Brooklyn that also gave developers the option to build residential properties.  “What do we see there today?…Exclusively residential development. The City of New York neglected to have elementary seats as part of that re-zoning…There needs to be new seats in District 13, today.”  Downtown Brooklyn School Solutions’ 2013 article, “The Problem with P.S. 8,” clearly lays out the challenges District 13 faces posed by over-development and predicts, “the contentious re-zoning of P.S. 8.”

Senator Daniel Squadron added, “I do disagree respectfully and professionally, but very strongly with what [Tom Taratko] said that the only mistake here was with re-zoning.”  He cited his frustration with the DOE’s lack of communication.  “Nobody has any faith that the DOE is going to come up with a good reasonable plan…so the short -term, medium-term and long-term are actually one problem.”

The Q&A period drew inquiries from predominantly parents of wait-listed children. The first burning question: who made the decision to cut the Kindergarten section and why?  Tom Taratko explained that while he was included in the conversation, the decision was made by committee involving the recommendation of P.S. 8 Principal Seth Phillips, the Office of Enrollment and the Space Planning analytics team.  He maintained, “I respect the instructional people’s point of view of what they can teach in the building…I would not impose upon [Seth Phillips] or make the recommendation to keep a sixth section. So for that I am responsible.”  Superintendent Barbara Freeman added that schools receive projections for the number of classes each year. And, despite having added a sixth section for the past two years, projections for P.S. 8 have never included a sixth Kindergarten section.

Taratko continued, “I do not believe that there will be a 6th section added [for 2015-16]. I don’t have the authority here to tell you that there will be a 6th section added. But I am here to write down everyone’s questions, concerns, see where the perceptions of our failures are, where our failures were and try to correct those.”  Again, this sparked shout outs from the audience of “Who makes the final decision?!”  Ultimately, he conceded the final word belongs to School Chancellor, Carmen Farina.

In response, a parent, directed a heartfelt plea to Tom Taratko pointing out the disconnect between information prospective parents received at community meetings and tours of P.S. 8 compared to the actual events.  “This wait-list is a devastation. There’s a difference between Seth [Phillips] telling us in January that about 5% of families may or may not get in and that usually by fall we’ll figure it out.’ There’s a HUGE difference between 5% and 40-50%!” 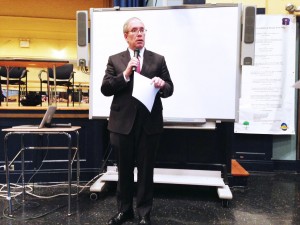 At this time, Comptroller, Scott Stringer briefly introduced his office’s audit titled “Department of Education Efforts to Alleviate Overcrowding in School Buildings.”  He also demonstrated solidarity with parents as a father whose child is zoned for an overcrowded school on the Upper West Side. “I just wanted to stop by tonight to say ‘I feel it, I know how scary it is,’ but I also want to pledge to work with Councilman Levin, Assemblymember Simon and Senator Squadron. We will work together, we will give you data, we will work with the parents association and the CEC and the DOE.”

RE-ZONING:
Once the Q&A continued, others expressed their skepticism and lack of faith in the DOE’s ability to deliver a suitable plan for re-zoning to the CEC. David Goldsmith stressed that any re-zoning plan presented by the DOE must be ready for a CEC vote by November 2015.  Goldsmith is working in conjunction with Councilman Levin on the formation of a taskforce created specifically to address the overcrowding in District 13’s public schools.  He added optimistically, “When people roll their sleeves up to get something done because it HAS to be done, because it’s our children, it WILL be done. And we’ll need your help.”   The mother of a 2016 ascending Kindergartner questioned whether re-zoning would even solve the problem and further challenged, “Why on earth is there no regulation that says if there are ‘x number of residential units built in a zone that x number of school seats have to accommodate them!’”

COMMUNITY:
The final questions of the night brought to light the downsides of ill-planned infrastructure.  A member of the P.S. 307 School Leadership Team, provided her perspective, “I would like to posit I’ve heard lots of talk about YOUR school, YOUR  community, YOUR kids…BUT, when you fight to stay in your school. Please do not disparage our school and our kids. Because…we read the things that you write about our kids and our schools.” The mother of a child attending P.S. 8 in the fall asked Tom Taratko to deliver a personal message to Carmen Farina, “Ask [her] how she would feel if it were her grandchild living in this zone?  She needs to put a face on this.”  Senator Squadron closed the meeting by saying that “Sometimes when governments really screw up, communities can turn on each other.  Those that got in, those that didn’t get in, existing P.S. 8 parents, existing P.S. 307 parents, prospective P.S. 307 parents are all in this together. We all have the same interests. What’s happening now is not good for 307 as it grows and does everything it can for its kids. It’s not good for P.S. 8, it’s not good for the parents here.”

NEXT STEPS:
As he did after the Town Hall meeting in November, Senator Squadron challenged Tom Taratko to a follow up meeting that would deliver answers for wait-listed parents.  David Goldsmith re-enforced the important work of the upcoming District 13 Taskforce. “The Task Force clearly understands what happens in one school has a very big effect completely across the district. And all planning has to be done in concert with planning for all students across the district. Let’s get busy folks, we’ve got a lot of work to do!”  The first Taskforce meeting is tentatively scheduled for the end of May.

Disclosure:  The author has been active in the parent group that created the ‘WeArePS8Too’ petition and continues to advocate toward solutions for P.S. 8 and District 13.