Tuesday evening’s hearing, called by Borough President Eric Adams (at left in photo, next to his Land Use Supervisor, Richard Bearak) as part of the Uniform Land Use Review Procedure (ULURP) for the proposed sale of the site of the Brooklyn Heights Branch of the Brooklyn Public Library (BPL) to developer Hudson Companies. Hudson proposes to demolish the existing library building (with an interim library available to the community at Our Lady of Lebanon Cathedral, Henry and Remsen Streets) and construct what is now planned to be a 36 story residential and commercial building on the site, with a new library, owned by BPL as a condominium, on portions of the first two floors as well as some below grade space. Hudson would also build two buildings providing “affordable housing” at sites in the Clinton Hill area.

Hudson would pay $52 million to the City, which owns the site, $40 million of which is to be made available to BPL for capital and maintenance expenses throughout the BPL system. In addition, Hudson would absorb the estimated $8 to $10 million cost of building the new library space, and the cost of providing the interim library. In its resolution recommending approval of the deal, Community Board 2 included its Land Use Committee’s condition that $2 million of the purchase price be set aside to cover maintenance costs of the new library. 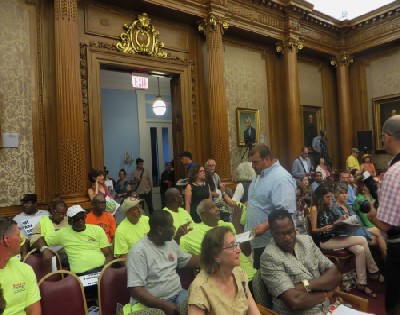 The Borough President’s Courtroom filled early. Some of the attendees were members of Build Up NYC, an alliance of unionized construction workers, wearing shirts identifying themselves as such. 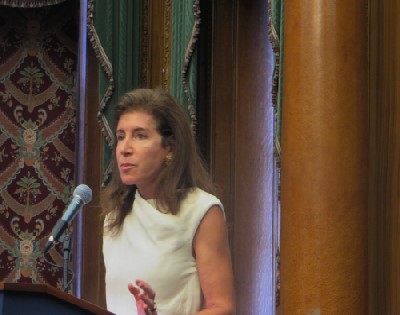 The first part of the hearing was devoted to presentations about the proposed deal. BPL President, Linda Johnson (photo above) spoke first, saying the deal was good for the community because it would produce a better, “21st century” library and the proceeds would allow BPL to make needed repairs and improvements to other libraries throughout the system. The present library, she said, is outmoded and contains much space that is unusable by the public and not needed. 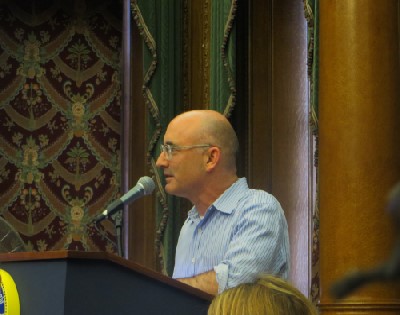 David Kramer, President of Hudson, followed with a presentation in which he set forth his views on how the project would benefit the BPL system, the community, and those needing affordable housing. Putting the affordable units off-site, he said, increased the number of them that could be made available. He revealed for the first time that the amount paid to St. Ann’s School for air rights was less than $6 million, and added that he needed the school’s permission to say this. When he argued against the claim that selling publicly owned land for private development was wrong, he was asked by B.P. Adams to stick to a factual presentation. Mr. Kramer also said that historically Hudson had used both union and non-union contractors on its projects. He wouldn’t commit to using union labor exclusively on this project, but said Hudson is committed to maximizing the use of local labor and of minority and women owned contractors. He said that information about the project is available to the public on this website.

Mr. Kramer was followed by Jonathan Marvel, head of Marvel Architects, designers of the proposed building and of the new library. He described the series of community design workshops in which the architects had received suggestions for the design of the library’s spaces. He mentioned getting input from students at a local school; the principal of that school, one of the Urban Assembly schools located on Adams Street, later spoke in favor of the deal, noting that the students found the present library uninviting. Mr. Marvel also revealed plans for the buildings to contain the affordable housing units. 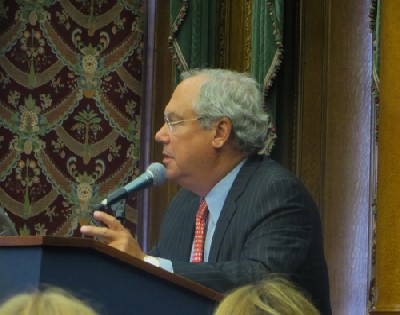 After the presentations by BPL, the developer, and the architect, members of the audience who had submitted forms asking to speak were called on to offer their views. The first several speakers called on were all library staffers who spoke in favor of the deal, as well as Brooklyn Heights resident and BPL board member Hank Gutman (photo above), who also favored it. A member of the audience went forward and said something to B.P. Adams, who turned to the mike and said “We were supposed to alternate speakers for and against. Richard [Mr. Bearak] hasn’t done that.” The speaker slips were then re-shuffled.

About seventy people spoke, each being allotted three minutes. Not all of them took their full allotted time. I didn’t keep score, but the “antis” seemed to slightly outnumber the “pros.” After each speech, there was applause; that for the “pro” speakers seemed almost equal to that for the “antis.” Much of the applause for those supporting the deal seemed to come from the Build Up NYC members. One of the speakers was Carole Raftrey, who represented Build Up NYC, and who urged Hudson to commit to using union contractors as well as minority and women owned ones. Several speakers opposed locating the affordable housing component off-site; Cobble Hill resident Donald Fleck objected that this would perpetuate the “tale of two cities” that Mayor de Blasio pledged to end in his election campaign, and noted that the schools for which the proposed affordable buildings would be zoned scored poorly. 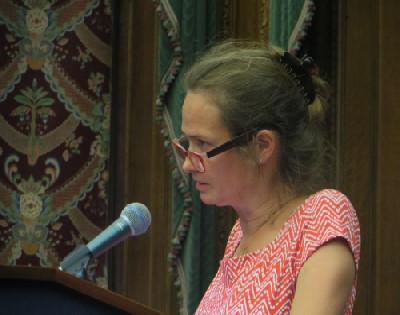 Speakers who favored approval of the library deal fell into several categories. Some, as noted, were BPL staff. While most of these were from the Brooklyn Heights branch, librarians from other branches that stood to gain funds for repairs or renovation also spoke in favor. Other supporters were representatives of civic organizations from neighborhoods, like Sunset Park, whose libraries they believed would gain from the deal. Erika Belsey Worth, a member of the Brooklyn Heights Association board (photo above) also spoke in favor, as did representatives of local business groups, including the Brooklyn Chamber of Commerce. Some in favor identified themselves simply as local residents who believed the new library would be an improvement over the present one.

Those opposed to approval objected on several grounds, many speakers including all or more than one objection. Perhaps the most frequently voiced on was that the proposed high rise residential building would, together with other residential projects underway or proposed, such as the Pierhouse, two high rise buildings at Pier 6 in Brooklyn Bridge Park, the redevelopment of the former Long Island College Hospital site by Fortis Property Group, and whatever may come, put intolerable stress on the local infrastructure, including schools, transportation, health care, water, sewerage, and so forth. Another objection was that the present library building is not, as argued, outmoded or oversized, and that the cost of repairing its air conditioning system has been exaggerated. One speaker, referring to the below ground space once planned as a fallout shelter that Ms. Johnson had called redundant, said that it was used for storage of archival material that was available to the public on request.

Some speakers argued that the sale price of $52 million was inadequate in view of the present state of the real estate market. Many speakers referred to the New York Public Library’s sale of the Donnell Library to developer who tore it down, then lost financing and reneged on a deal to build on the site with a new library included. As a consequence, there was nothing on the site for some years. Now a new developer has taken over, with a promise to put a new library below ground level, and a projected sale price of a penthouse of $60 million. Speakers who raised the issue of the purchase price also alleged lack of transparency in the process leading to the proposed sale.

A final issue raised by some speakers opposing the project is the question of transferring public land and other assets to private ownership. In his presentation at the beginning of the hearing, Mr. Kramer stressed the need to transfer city owned land in order to build affordable housing. But where the land in question holds a public asset such as a library, a hospital, or park space, as one speaker put it, “To sell a piece of the public trust for one-time profit is to lose it forever.” Susan Lerner, Executive Director of Common Cause New York, said “selling a public asset is only a short-term solution for the continually looming problem of how to maintain and strengthen our urban Commons.” She added, “Most anything can be monetized, but selling a public asset is forever….the new library [is] vulnerable to future whims of the condo developers instead of the full protection of a tax lot owned by the City.” 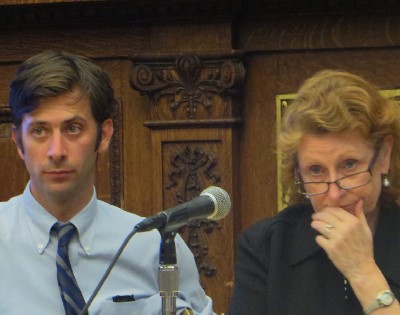 B.P. Adams has said he has not yet decided whether to support the proposed library deal. He has said that affordable housing is a very important concern of his; this indicates he may base his decision on the 114 units of such housing promised by Hudson. Still, the question must then pass to the City Planning Commission, and from there to the City Council. City Council Member Stephen Levin, in the photo above with State Assembly Member Jo Anne Simon (both were present throughout the hearing), as the representative of the district in which the library is located, will have a strong influence on how the Council acts. Levin says he has not yet decided; according to Politico New York, “he is weighing whether it is appropriate for the city to sell a public asset to a private developer.”