Here’s Why Your Brooklyn Heights 5 Year Old Might Be Turned Away From P.S. 8 This Fall

The parent grapevine is on fire.  Brooklyn Heights parents in District 13 with children born in 2010 and expecting their kids to have a seat at P.S. 8 in the fall were left anxious, angry and confused after this reporter learned there will be 5 Kindergarten classes next year instead of the current 6.  For those following the narrative of the overcrowding issue at P.S. 8, this announcement came as a surprise. And not the good kind.

In November 2013, P.S. 8 cut their Pre-K classes to make room for a sixth K class. At the P.S. 8 PTA Town Hall in November of last year, concerned parents were promised transparency from the DOE but no short-term solutions were presented. The meeting was contentious for many. 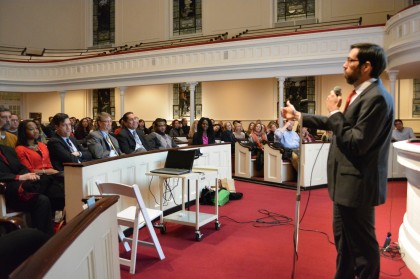 In late January the DOE held a special information session on Kindergarten Admission. The Q&A session of this gathering quickly turned to  parents re-raising questions asked at the November Town Hall meeting.  Then earlier this week the DOE served the community the feared cut in the number of Kindergarten classes.

Sources claim this decision was made without the knowledge of neighborhood advocates, NYC Councilmember Steve Levin and NY State Senator Daniel Squadron. Daniel Squadron made the following statement, “My colleagues and I raised the flag with the community about overcrowding at PS 8 months ago. We have been clear that turning away families this year is unacceptable. We must also ensure that our kids have adequate, quality learning space in PS 8 next year and for years to come. We will continue to push DOE for substantive engagement and a solution that ensures our eligible 5 and 6-year-old students have a seat at P.S. 8.”

Council Member, Steve Levin commented, “I have been working with PS 8 parents, the PTA, the principal and other local elected officials for some time to urge DOE to take the issue of overcrowding at PS 8 seriously and come forward with solutions that are sensitive to the needs of prospective zoned families and the PS 8 community as a whole. It’s time for the DOE to consider all available options and move to ensure that every child zoned for PS 8 has the chance to receive a quality education in our public schools.”

What does this mean for parents and children hoping to attend a safe, good school in their own neighborhood?

In a recent development, some well informed parents have hinted the DOE could potentially reverse its decision with enough community pressure.  To voice your opinion, contact any of the DOE representatives and our elected officials:

DISCLOSURE: Both the author of the article and the publisher of Brooklyn Heights Blog have children born in 2010 who have applied to P.S. 8 K in the Fall.