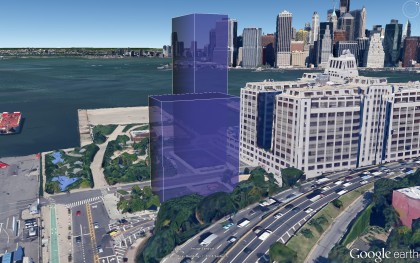 According to a statement on the Association’s website, the BHA board commented:

While we have long accepted housing as the primary source of operating and maintenance funds for the Park, we believe that a 315 foot structure on Pier 6 is simply too tall and will overpower the surrounding landscape. In a recent letter to Regina Myer, President of the Brooklyn Bridge Park Corporation, we asked the Park to reduce the size of the buildings and voiced our support of the Community Advisory Council’s request for more detailed revenue and cost projections.

In the letter to BBP’s Myer the BHA board was clear about their concerns regarding the plans which have generated outrage among local residents:

The new buildings at Pier 6 are an opportunity to transform the Brooklyn skyline as seen from Manhattan, from the Brooklyn Bridge, from New York Harbor, from the Park, and from elsewhere in Brooklyn. Our careful review of the 14 responses, however, confirms our objection to the height of the taller building. Although many renowned architects and firms responded to the RFP, not one of the tower sketches submitted looks anything other than massive and out of scale.

In every proposal, the 315-foot height overpowers the surrounding context, including One Brooklyn Bridge Park, the building to be placed on Parcel B, and the Park itself. Rather than enhancing the surroundings, as the design guidelines intend, a building of such height and bulk would overwhelm the Park’s waterfront, create a visual and psychological barrier, and loom over our neighborhood. A more ideal height would be consistent with the second planned building and the height of the primary roof line of One Brooklyn Bridge Park (approximately 150 feet).

Last week the BHA posted a statement about its displeasure with the height of the Pierhouse Hotel, another contentious issue among local residents. In 2005 Otis Pearsall, working with the BHA, negotiated a maximum height of 98 feet for the building which was to replace the demolished National Cold Storage warehouse, in order to preserve views of Brooklyn Bridge from the Promenade.

For a variety of reasons, including Superstorm Sandy, which required the developers of Pierhouse to relocate building mechanicals so as not to be vulnerable to flooding, and apparent miscommunication about the agreement made between Mr. Pearsall, Matthew Urbanski, project manager for Michael Van Valkenburg Associates and Wendy Leventer, President of the Brooklyn Bridge Park Development Corporation, the height of the Pierhouse apparently exceeds 130 feet, a situation that has caused much dissent, apparently including among members of the BHA board.