Height of BBP’s Pierhouse Hotel: What Exactly IS the Deal?

To understand the disputed height restrictions of the Pierhouse Hotel structure in Brooklyn Bridge Park’s Pier 1, a number of variables need clarification, including the Brooklyn Bridge Park Corporation’s (BBPC’s) adherence to its own agreement, how the NYC Department of Planning Brooklyn Heights Scenic View District figures into the discussion, and the impact of Hurricane Sandy on New York City waterfront construction requirements.

What is not in dispute is that in the fall of 2005, Otis Pratt Pearsall—the well-respected preservationist from Brooklyn Heights—representeing the Brooklyn Heights Association (BHA) met with Matthew Urbanski, project manager for Michael Van Valkenburgh Associates, and Wendy Leventer, President of the Brooklyn Bridge Park Development Corporation, as BBPC was then called.

In a recent email to Mr. Urbanski obtained by BHB, Mr. Pearsall states the meeting’s purpose was to discuss “limiting the height of the hotel proposed for Pier 1 so as to assure an uninterrupted view of the Brooklyn Bridge roadbed from the Brooklyn Heights Promenade.”

According to a 33 page BHA document dated November 2, 2005, which was meant to codify the discussions early that year, Mr. Pearsall stressed: “Clearly the hotel (including any mechanicals visible from the Promenade) should not in any circumstance be permitted to exceed the 98 foot roofline of the [National] Cold Storage buildings [which occupied the approximate space where the Pierhouse is being built] without the bulkheads.” (See photo below, from Bridge and Tunnel Club, via Brownstoner, of the warehouse building before its demolition, and compare with photo at top, by Claude Scales, of Pierhouse structure taken from approximately the same position on the Promenade–between Pierrepont and Clark streets–today.) 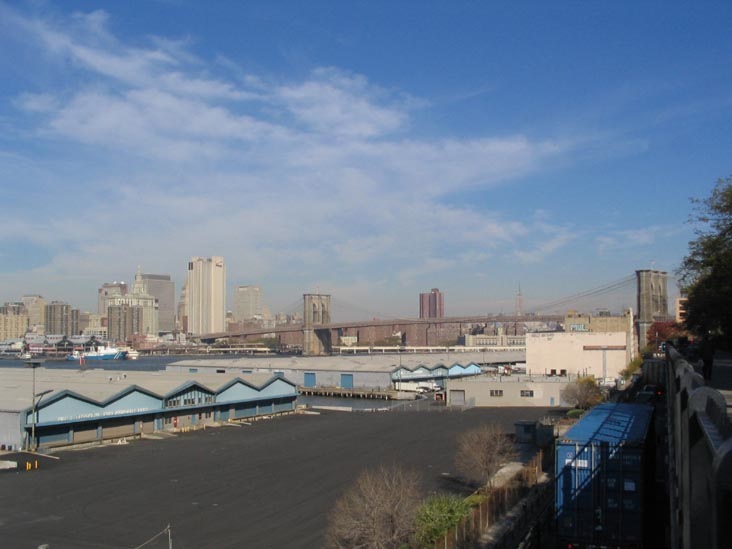 This is where BBPC institutional memory comes into question. Regina Myer replaced Ms. Leventer as President in December 2007. Presumably, a transfer of responsibilities included a commitment to the carefully negotiated deal about the Pierhouse structure, especially because the importance of Brooklyn Bridge views from the Promenade was clearly documented on page 14 of BBP’s RFP for Hotel and Residential Development at Pier 1 from 2011.

Given that the Pierhouse Hotel as now built is an estimated 130 feet high—including three stories of visible mechanical equipment as well as an outdoor bar—Marvel Architects, designers of the Pierhouse complex, did not honor the 2005 agreement which is also documented in BBP’s Final Environmental Impact Statement (FEIS), Chapter 24 “Response to Comments on the DEIS.”

[Editor’s Note: Marvel Architects did not respond to repeated requests for information regarding the Pierhouse Hotel structure].

According to the aforementioned NYC Zoning Resolution, Article X on Special Purpose Districts, the Brooklyn Heights Scenic View District is “…to be protected pursuant to the provisions of this Section includ[ing]: the panoramic view of the lower Manhattan skyline which includes such landmarks as the Brooklyn Bridge archway, the South Street Seaport, the Whitehall Ferry Terminal, and the vistas of the Statue of Liberty and Governor’s Island.”

The purposes of this district, specifically designated as SV-1, are:
“(a) to preserve, protect and prevent obstruction of outstanding scenic views as seen from a mapped public park or an esplanade or a mapped public place directly accessible to the public; and
(b) to promote the most desirable use of land and direction of building development, to assure the maintenance and enhancement of the aesthetic aspects of scenic views, to conserve the value of land and buildings and to protect the City’s tax revenues.” 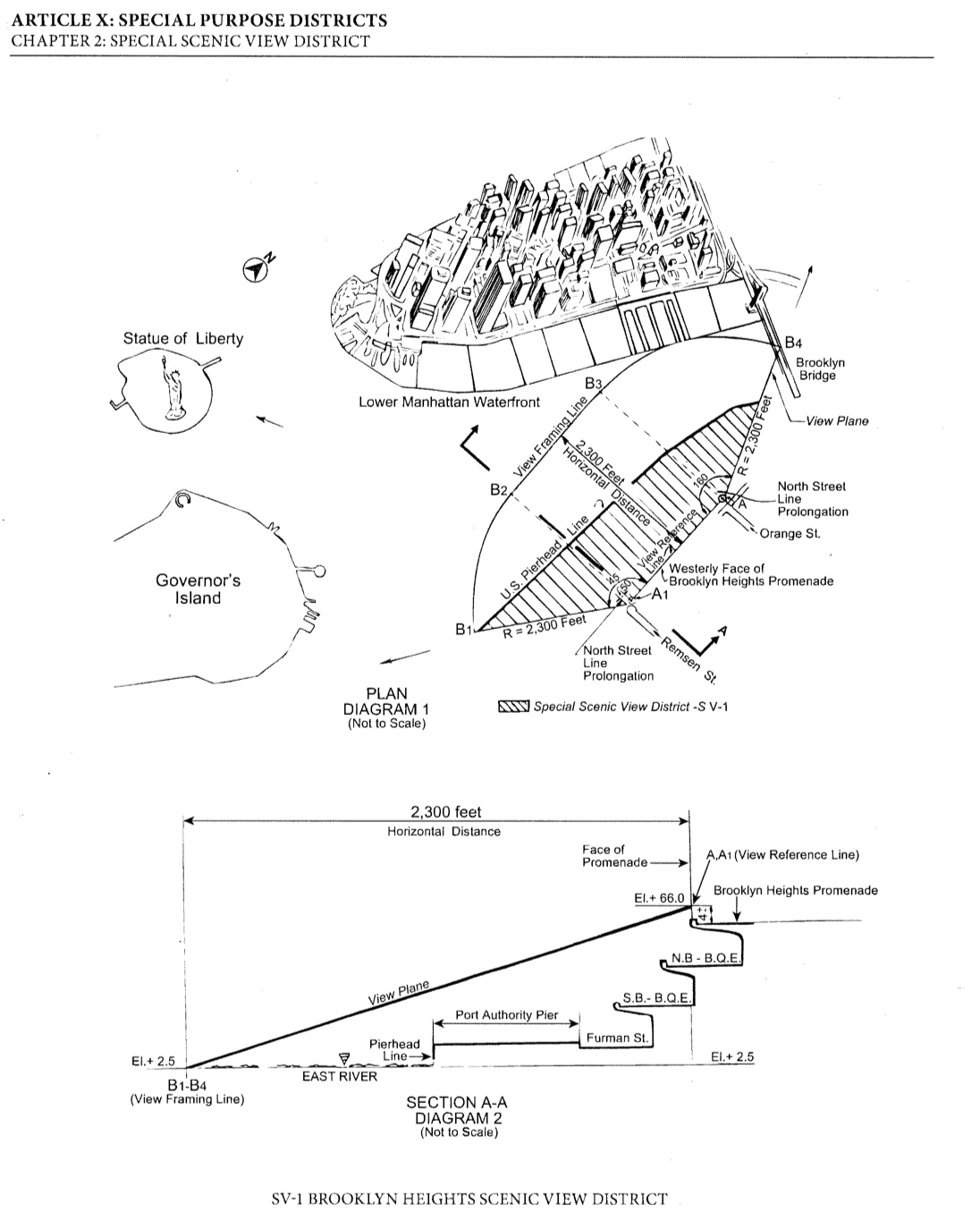 SV-1 might be invoked because the Pierhouse Hotel’s height clearly obstructs the Promenade view of what’s called the “necklace” of the Brooklyn Bridge – its elegant and much admired cable structure.

But in his email to BHB, Mr. Pearsall disputed this interpretation. “There is no Scenic View Plane for the Brooklyn Bridge,” wrote Mr. Pearsall. “There is the SV-1 Brooklyn Heights Scenic View District…. It barely touches the Bridge. It has no application to the tall part of the hotel, which is in the unprotected triangle north of the View Plane.”

Mr. Pearsall’s insistence that SV-1 is not the ruling authority in this matter underscores his belief that the only binding height restriction on the Pierhouse Hotel is the 2005 agreement.

According to Belinda Cape, BBP Vice President for Strategic Partnerships, the actual Pierhouse Hotel height was driven by building conditions imposed as a result of Superstorm Sandy in 2012.

“After Hurricane Sandy,” Ms. Cape said in an email yesterday to BHB, “the need to place additional back-up mechanical equipment, as required by NYC building code, did increase the size of the bulkhead to about 3 stories in one isolated location, which is permitted under NYC zoning.”

A conversation with the NYC Department of City Planning’s Press Office determined that Brooklyn Bridge Park building heights are not subject to City Planning approval, but are solely governed by documents specifically drafted by the BBPC and approved by the state, including the BBPC’s FEIS.

In her email Ms. Cape added that “Throughout the design process – inclusive of post-Sandy alterations – BBP kept the community and BHA fully apprised.”

Last Wednesday in a statement posted on its website, the BHA clearly stated that it was not informed about the Pierhouse height. “We are saddened and disappointed that the new buildings seriously compromise that iconic, world class view [of the Brooklyn Bridge]. We have communicated this to the BBPC and we request that its leadership and the developers of this project take any steps possible to mitigate the Pierhouse development’s visual obstruction of the Bridge.”

As Mr. Pearsall stated so succinctly in 2005, “Please remember, there are views and then there are views. This is one of the world’s best. Let’s not nibble at it.”