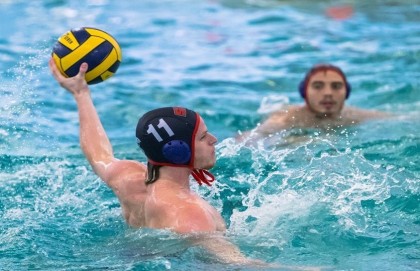 By brooklynheightsblog on November 1, 2014 11:34 am in Brooklyn Heights, Sports

Riding a five-game winning streak that has pushed their record over the .500 mark for the first time this season, the St. Francis Brooklyn men’s water polo team (10-9; 8-1 CWPA Northern Division) closes out its Collegiate Water Polo Association’s (CWPA) regular season schedule at home this weekend with key matches against Brown, Harvard and M.I.T.

At stake for the Terriers is a possible fourth straight Northern Division title and ninth in the last ten years.

At 8pm tonight SFC will face M.I.T (12-11; 4-5 CWPA Northern Division). Under first year head coach David Andriole, the Engineers have played well against Northern Division foes, including a competitive 14-8 loss to the Terriers at Harvard on September 27.

St. Francis will certainly be motivated today to avenge their lone home blemish in years and to defeat a conference foe that it has dominated in recent years. Wins over the Crimson and the Engineers will almost certainly set the Terriers up for a winner-take-all match tomorrow morning at 10am against Brown (19-6; 8-1 CWPA Northern Division) for the division’s regular season title and top seeding at the Northern Division Championships next weekend at Harvard.

The 13th ranked Bruins come into Brooklyn riding a four game winning streak, and own a 10-6 win over the Terriers on September 21 at Brown’s Katherine Moran Coleman Aquatics Center.

The Terriers are led on offense by junior Bora Dimitrov, who’s netted 30 goals in his first season in Brooklyn Heights.

Sophomore Ilija Djuretic has 30 goals for SFC, while junior co-captain Liam Veazey leads St. Francis with 11 assist to go along with 19 goals.

All matches are free and open to the public. For more information about this an other St. Francis Brooklyn athletic events, please visit www.sfcathletics.com or call 718-489-5490.