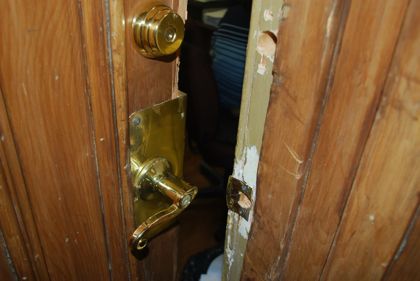 The synagogue at 117 Remsen Street has now been burgled five times since June, and Rabbi Aaron Raskin said he is already at work to install an alarm system to ward off future attacks. On Monday night, the burglar made off with $30 in cash.

At around 4 am on Monday morning, video surveillance footage shows that the burglar weaseled his way past a magnetic lock on the front door. He then walked upstairs and smashed in the rabbi’s heavy wooden office door, and poked around for money. Last week, he broke off open the basement door’s lock, and was foiled during a break-in attempt on Sunday night. (The surveillance tape shows that he brought a shovel for the snowfall, but wasn’t able to get in the front door.) Last summer, he got in by breaking through the glass front doors.

“It’s very frustrating, and we’re doing everything we can to make sure it never happens again,” said Rabbi Raskin.

Shternie Raskin, the rabbi’s wife and the synagogue’s preschool director, said they know the burglar. He started coming to the synagogue five years ago and asked for charity, and the rabbi initially obliged. But when the man kept coming back and was then caught stealing charity boxes on his way out, the rabbi asked him politely to leave. Instead, the man returns every so often and tries to break in.

The damages and repercussions are, of course, not cheap. Lost charity money aside, the synagogue has now invested in a series of new security measures. After swastikas were spraypainted on the synagogue in 2007, they hired a security guard to man the front door. Raskin installed security camera after the June burglary and, in August, he installed a heavy-duty magnet lock and deadbolt for the front door. Last week, he bought lock guards and a new lock for the basement door. Up next is the alarm system.

“I don’t feel that [the burglar] is dangerous — it’s just annoying,” said Shternie Raskin. “And it’s expensive to buy the new locks and the door.”

Cops were dusting for fingerprints on Tuesday morning, and are investigating the incidents, a cop source said. If anyone has information about the crimes, call the 84th Precinct at (718) 875-6811.