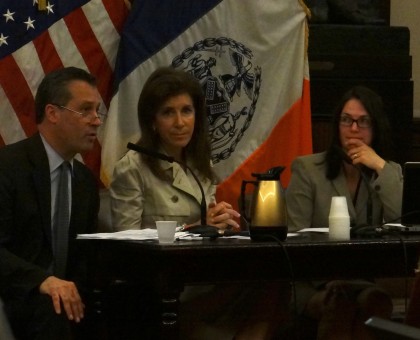 By brooklynheightsblog on June 4, 2014 12:22 am in Brooklyn Heights, Development, Government, Real Estate

While increased support for NYC libraries is not a tough sell—before the collected library leaders made their pitch to the Council Committee on Libraries they presented a poignant video on the positive impact of local libraries—the reality is that Ms. Johnson’s task is far more difficult than her fellow petitioners for City money. Besides millions in additional operating funds, the BPL’s chief decision maker made clear that her organization seeks an additional $82 million in funding for emergency infrastructure repairs to the system’s 60 branches.

While the focus of her presentation was to secure funds for 200 more librarians, expanded programming, and more Sunday branch openings, Ms. Johnson was dogged by questions about potential sales of BPL sites.

Public Advocate Letitia James—who previously represented the 35th Council District in Brooklyn—made an appearance and had pointed questions about why the Library has assessed the potential sale of all properties in its system.

This assessment is a prudent way to “make the best use of our resources in regards to where our libraries are located,” answered Ms. Johnson, who added: “In the case where a particular library has significant value, we [are open to] leveraging that value in order to take care of that branch but also those branches in the system that don’t have intrinsic value but could benefit greatly from investment in the infrastructure there.”

Ms. Johnson said that there is not an overall real estate plan for all the branches, and that the Library has no intention of selling its Pacific Branch, the first Carnegie Library built in Brooklyn. Rather, BPL seeks a partner to provide funding for $9 million in capital repairs so as to make this branch, which is not ADA compliant, accessible to all library patrons.

About the Pacific branch, Johnson remarked that “we will preserve that beautiful building” but lamented that the building’s condition “keeps us all up at night.”

Council Member Antonio Reynoso of the 34th District, based primarily in Williamsburg, questioned the biggest variable in a proposed sale of the Brooklyn Heights library site: how much is BPL’s most marketable asset worth?

Hewing to what has been a consistent policy, Ms. Johnson declined to reveal what the city-owned property might be worth, saying that the price will be determined by fair market value. The Library’s president also touted that the sale will result in a state of the art library to replace the existing branch, currently located in “a poorly laid out and uninspiring building.”

Brad Lander, District 39 Council Member whose district includes Cobble Hill, opened by affirming his support for the Brooklyn Heights library sale. He then went on to chide BPL for its lack of organizational planning.

“Can you start to imagine what the system will be if you’re able to come up with some additional resources?” said Lander. “What’s the process for being smart, thoughtful and strategic in how you plan and efficient in how you spend?”

“A significant problem that we have right now is that… we have limited resources to deal with very large problems,” admittted Ms. Johnson.

“In a perfect world I think we’d get through [this capital shortfall] and that’s why we’ve asked for this emergency funding…. If we can get the emergencies taken care of then we could actually come up with a much better system and plan to address remaining [problems].”

In yet another remark about the Brooklyn Heights library proposal, Ms. Johnson said that the deal “will yield a pot of money” to address BPL’s numerous capital needs while adding: “The need in the building is great but the need in the community is greater.”

Earlier in the session, Ms. Johnson revealed what BPL’s weak financial position and backlog of capital repairs means for her organization.

“Really what we need to do is to create inspiring spaces. Unfortunately, until we have safe spaces we can’t get there.”

PHOTO: BPL President Linda E. Johnson flanked by Tony Marx of the NYPL and Bridget Quinn-Carey of the Queens Library.