Round one of the annual Battle of Brooklyn rivalry between the LIU Brooklyn and St. Francis Brooklyn men’s and women’s basketball teams is over. With two decisive wins, the Terriers registered a double knockout.

On Thursday night at the Pope Athletic Center in Brooklyn Heights, Ben Mockford rained three’s on the beleaguered Blackbirds. The senior guard from Shoreham-by-Sea, England, hit for a career high 30 points on 8 of 14 three-point attempts as the Terriers captured a decisive 78-64 win.

The St. Francis women kept the good times rolling on Saturday afternoon at Barclays Center, with a dominant 69-48 win over LIU. Junior guard Eilidh Simpson from Melbourne, Australia hit for a game-high 17 points, leading the Terriers to their eighth straight win and third straight series victory over the Blackbirds. 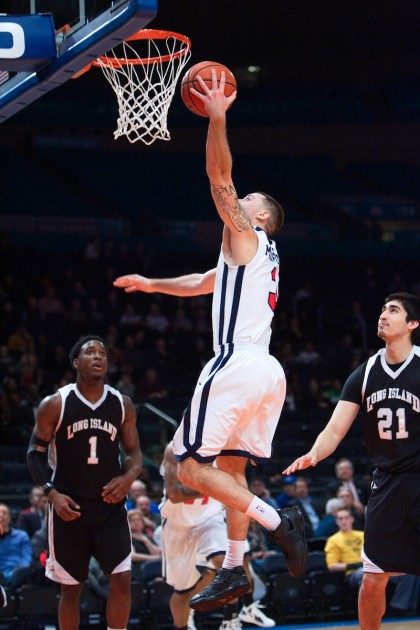 These wins are decisive because, until recently, the Blackbirds have dominated their cross-borough rivals. Coming into the latest edition of this home and home matchup, St. Francis men’s squad had dropped six straight and 9 of 10. The Terriers women’s squad had fared even worse, having lost 13 of 15 to the Blackbirds from 2005 to 2012.

For St. Francis, this recent change of fortune may indicate a seismic shift in their decades-long rivalry. For the past three years, LIU Brooklyn men’s squad has dominated the Northeast Conference (NEC)—which also included St. Francis—winning the conference’s last three titles and qualifying for three-straight NCAA Men’s Basketball tournament. If the Terriers have hopes of capturing the program’s first-ever NEC title and NCAA berth, it’s essential that they beat the Blackbirds along the way.

Seeking respectability under second-year coach John Thurston, St. Francis women’s program has even more incentive to beat LIU. Over the program’s 40 years of existence, the Terriers have often operated in the Blackbirds’ shadows. A league-best 12-2 this season, including a 3-0 Northeast Conference record for the first time ever, the resurgent Terriers are enjoying a bevy of program firsts, including, a #25 ranking in the latest CollegeInsider.com Top 25 Mid-Major Poll.

For both Terrier teams, the road ahead contains many potholes. Following their LIU win, the SFC men stumbled against NEC opponent Mount St. Mary’s, dropping an 88-82 road decision on Saturday despite junior forward Jalen Cannon’s career-high 25 points. Up next for St. Francis (10-7; 1-1 NEC) is a game on Thursday night against Central Connecticut State (4-11; 0-2 NEC).

The St. Francis women’s squad will look to continue their winning ways when they follow their male counterparts to Emmitsburg, Maryland for a game this Monday against the Mount St. Mary’s Mountaineers (6-9; 1-2 NEC).

Rematches with LIU Brooklyn loom ominously in the not-so-distant future: the St. Francis men will play LIU at Barclays Center at 4 p.m. on Sunday, February 16, while the Terrier women’s squad will face to the Blackbirds at the Pope Center in their final game of 2013-14 regular season.

By then it should be clear just how realistic first time NEC titles are for both the men’s and women’s programs at St. Francis.